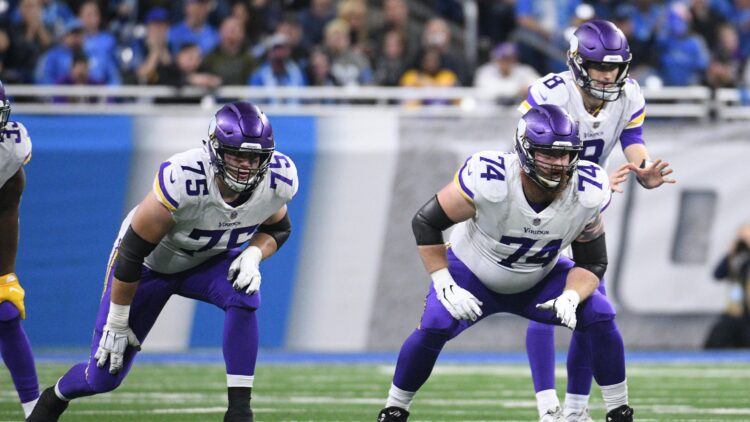 You might be laced with optimism for the Minnesota Vikings 2021 offensive line, but the general public is not.

Last season, the Vikings finished 29th in NFL for pass protection per Pro Football Focus, a ranking territory all too familiar for a team that notoriously struggles to figure out that sect of the depth chart.

Notice that one season in which the pass protection was near-average — the franchise came with a single game of reaching a home Super Bowl.

Indeed, the 2020 offensive line was messy, although right tackle Brian O’Neill patched together another solid season. Left tackle Riley Reiff, who was handsomely compensated, departed for the Cincinnati Bengals via free agency. He was replaced by rookie Christian Darrisaw, a 1st-Round draft pick from Virginia Tech. More importantly, Dakota Dozier and Dru Samia are unlikely to start in 2021. Those two guards were the unfortunate catalyst to most of the Vikings pass-protecting woes during the pandemic season.

General Manager Rick Spielman has not ignored this offensive line malady, though. It’s to the contrary, in fact. No other NFL team has drafted more offensive linemen with 2nd-Round-or-higher draft capital in the last four NFL drafts than the Vikings. That’s why the 2021 outlook feels different. Journeymen backups [probably] won’t be tapped to start Week 1 as has occurred in years past. Instead, the organically-drafted personalities (from left to right) of Christian Darrisaw, Ezra Cleveland, Garrett Bradbury, Wyatt Davis, and Brian O’Neill should get the bulk of playing time.

Minnesotans are giddy about the possibilities. But the rest of the world needs convincing. Pro Football Network offered its 2021 OL rankings heading into this season. The Vikings dwell in a ubiquitous standing — seventh-worst in the league.

“One of the toughest offensive lines to judge heading into the 2021 NFL season is the Minnesota Vikings. The returning four of Brian O’Neill, Dakota Dozier, Garrett Bradbury, and Ezra Cleveland all ranked in the middle of the NFL at their respective positions in 2020. Of the four, Bradbury struggled the most with 39 blown blocks, including a league-leading 22 blown pass blocks. The addition of Christian Darrisaw adds talent, but he may need time to settle. The range of outcomes for a rookie offensive lineman is vast. He could settle straight in as we saw Mekhi Becton and Tristan Wirfs do, or he could see similar struggles to Andrew Thomas. If Darrisaw does play well, this unit could finish the season around the league average. Yet, if he struggles, Kirk Cousins and Dalvin Cook could be in for a tough year.“

To a degree, Rolfe is correct. The zeal surrounding the revamped offensive line is contingent on production, not hype. The kicker is that the bar is dastardly low. The Vikings aren’t taking a large gamble on messing up a good thing. Almost any competent output — mediocrity, even — from Darrisaw and Davis will spell improvement.

And this unit must coalesce quickly. Some onlookers of the team perceive the Zimmer-Cousins-Spielman experiment as a stale one now. A year-end standing that misses the postseason will signify wholesale change — or the very least, heavily flirt with the idea.

A productive, pass-protecting line — finally — will go a long way in accompanying a defense that should be markedly better than the 2020 regression.