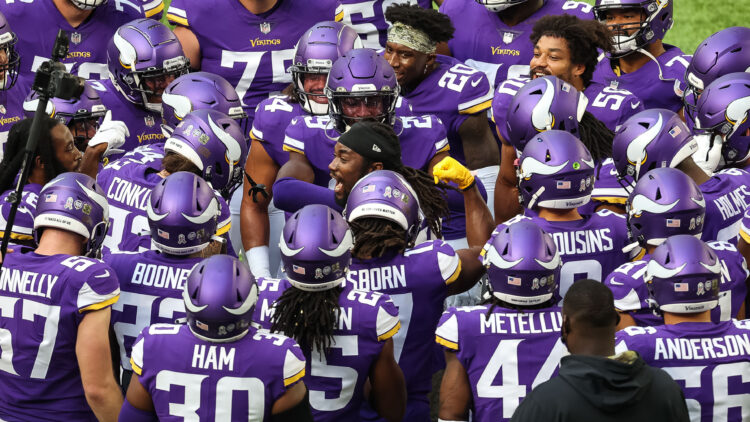 In due time, I’ll offer up a piece covering a few reasons for purple pessimism. It’s been a long week, though, so I thought it best to offer up some hope and positivity.

The 2021 regular season is fast approaching. Joe Burrow’s Bengals await; I believe we’ll start 1-0. Of course, merely winning one game isn’t cause for celebration, but I do think we’ve got a shot to be a strong team. Here are my top-3 reasons for optimism.

I’m as disappointed as anyone about the Irv Smith Jr. injury. Like the rest of the world, I believed he was going to have a major breakout season in 2021. His loss will be felt throughout the year even though Chris Herndon can have a strong season.

Even without Irv, Minnesota still boasts perhaps the best trio of skill players in the NFL. Justin Jefferson, Adam Thielen, and Dalvin Cook must keep opposing defensive coordinators up at night. I know I’d be pretty stressed out about how to contain them.

In all likelihood, DCs will continue focusing on trying to slow Cook. He is, after all, the engine that makes our offense go. Lil’Kub would be wise to find creative ways to get Cook the ball in space. I’m all for a few less Cook runs if it means a few more Cook catches. Speaking of catches, both Thielen and Jefferson should have plenty. They could combine for close to 200 in 2021. I know I’ve expressed concern about the purple pass catchers, but we’ll be fine as long as these two stay healthy.

The Michael Pierce – Dalvin Tomlinson pair does appear somewhat clunky on paper. On the field is all that matters, though. Both have the capacity to completely overwhelm interior linemen, an ability that will make life considerably easier for our DEs and LBs.

Hunter, as far as I can tell, looks both healthy and motivated. Here is what a recent Vikings.com article had to say: “Hunter was held out of the preseason, but he showed plenty in training camp practices, including that he’s fully healthy. Expect him to be among the league’s top pass rushers once again in 2021. ‘Danielle, when he’s out there, is pretty special,’ Zimmer said.” Indeed.

Before missing all of last season, Hunter had consecutive 14.5 sack seasons. Hunter’s impact goes beyond just the sacks. Offenses need to account for him on every play. Sometimes, that involves keeping an extra man to protect the QB (and therefore one less receiving option). Sometimes that means plays that are designed to get the ball out of the QB’s hands quickly rather than attempt a pass downfield. Put simply, Hunter changes the outlook for Minnesota’s defense. Having a true #1 edge rusher does that.

From there, the Vikings should be hoping for one or two of their other defensive linemen to stand out. If Armon Watts, Stephen Weatherly, D.J. Wonnum, Everson Griffen, or Sheldon Richardson play even above average, Minnesota’s d-line will be an absolute handful. I’ve got high hopes for Watts, Griffen, and Wonnum.

Didn’t see this one coming, did you?

I get that he’s on the hot seat. That’s what happens when you’ve been leading a team for 7 seasons. To still be employed by the Vikings in 2022, Zim will need to get his team to play well in 2021. I’m among the purple writers who think Zim is well-suited for the job.

In his seven years, Zimmer has accumulated a .576 winning percentage. Consider all that he’s had to overcome: the Adrian Peterson situation, the Bridgewater injury, the eye surgeries, the sudden passing of his OL coach, the 57 offensive coordinators (give or take), etc. There are a ton of other less-than-ideal circumstances he has had to navigate. One of the reasons why I’ve always respected Zim is that he just keeps working.

A few months ago, there was much wailing and gnashing of teeth over reports that players didn’t want to play for Zim. Frankly, that article doesn’t look very good now. Everson Griffen, Sheldon Richardson, Mackensie Alexander, and Stephen Weatherly came back. Harrison Smith would have no shortage of interest, but he opted for a sizeable extension. Patrick Peterson intentionally sought out the Vikings in free agency because he wanted to play for Zim. I’m sure there are days when playing for Zim is tough; I’m also sure that there are relationships that just don’t work out. Zim is a good coach, though.

For us to be successful in 2021, we’ll need to be resilient. It just so happens that resilience is one of Zim’s best attributes.