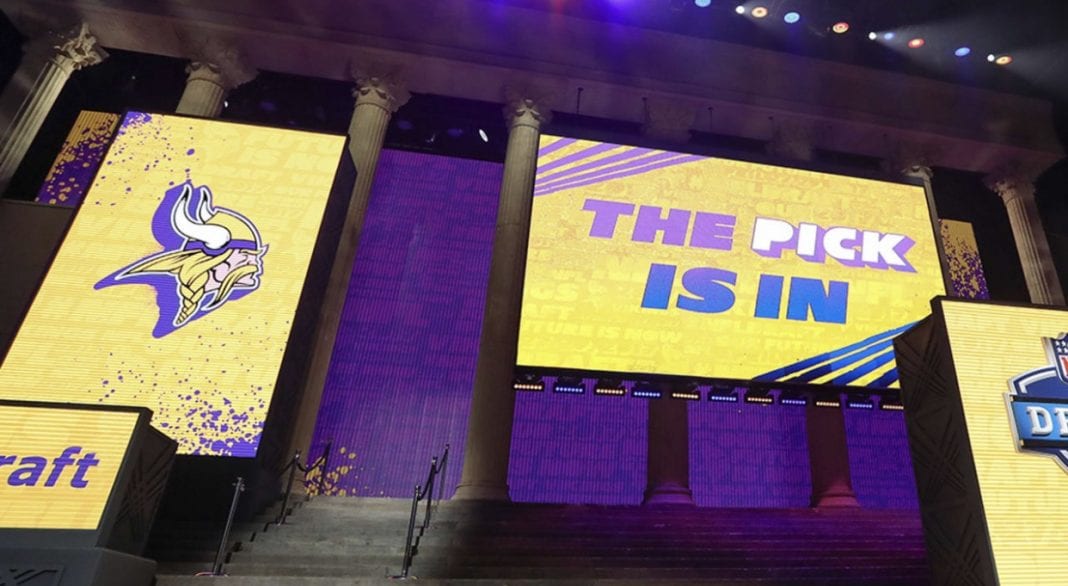 Trading up in the draft is all the craze since Kansas City saw the dividends of doing just that pay off in a big way.Patrick Mahomes led the Chiefs to a Super Bowl in just his second year as a starter. The Vikings are unlikely to trade into the top ten as it would take most of this year and next year’s draft capital to do so. However, several star prospects are slated to fall outside of the top ten, and Minnesota should be willing to move up and snatch one.

Here are my picks for potential trade up targets for the Vikings in the April 2020 Draft:

Becton is a mountain of a man and could fit right in at left tackle for the Vikings. If we are able to sign a capable guard in free agency this would be the best looking offensive line Minnesota has had in years. The price is steep, but protecting Cousins is invaluable.

The price for Jordan Love is going to be steep, so waiting as long as possible before trading up will likely be the move. Anywhere past pick 13 is dangerous territory, so the Vikings trade some extra assets to move up and take their QB of the future. Jordan Love still has messy mechanics, but he possesses that superstar-like “it” factor.

Similar deals between the last two trades because the picks are right next to one another. Andrew Thomas is another large tackle prospect who can also play guard. He is a day one starter at either tackle or guard making him well worth the trade up.

Now that the number of spots the Vikings would be jumping is in the single digits, the capital needed to pull off the trade drops severely, unless someone gets desperate. Epenesa is a veteran-like pass rusher with the ability to play on the interior or the edge. He’s not the fastest guy, which will likely lead to him falling in the draft, but he’s extremely efficient.

The Vikings don’t usually trade back in the 1st round, but this may be the year to do it. Their positions of need aren’t the strength of this draft, and it could lead to all of the 1st round talent on their big board being gone by pick 25. Let’s explore trade back scenarios that would land the team a decent player and more picks.

The Titans surprised everyone with a trip to the AFC championship game last season. They’ll look to stay relevant with added talent to the defensive line or linebacking core. They should be willing to part ways with their third rounder despite not having a second round pick. Securing a talent like Gallimore, Davidson, or Blacklock would be worth it. The Vikings would land a fantastic corner prospect and pick up another top 100 pick. Diggs is a long, physical corner who excels in zone coverage, but also does well in press man coverage.

With the best tackles in this draft going early, the Vikings could move out of the first round, and land a prospect at the top of the next wave of tackles. Wanogho is a Brian O’Neill kind of athlete: good speed, okay technique, but needs to play stronger physically. His talent is best suited for a zone scheme, and the Vikes just happen to have a mastermind in Gary Kubiak who runs just the scheme. The Colts on the other hand trade up to nab a receiver, or maybe a defensive back that fell too far. Having two top 15 second round picks makes moving back into the first round an easy decision for them.

There are several teams in the mid second round that have a bundle of comp picks. So packaging a deal to move up back into the first round should not be hard for them. For example the ravens sent two second round picks and a fourth to trade for Lamar Jackson. It  would be unlikely the Vikings trade back this far, but if they do they would get three chances to hit on a top 100 prospect. Ross Blacklock could be the best three technique in this draft. Aaron Donald like twitch on the inside that will leave guards grabbing at air.