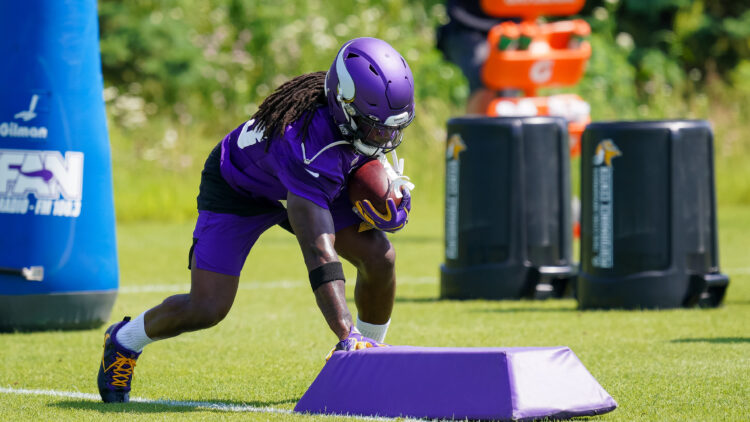 Dickerson rushed for a mystical 2,105 yards in 1984, leading the Los Angeles Rams to the postseason and a loss to the Phil Simms-led New York Giants. The Rams tailback also scored 14 touchdowns that season.

While Cook and Peterson are vastly different running backs stylistically, Cook is Peterson’s immediate replacement, holding down the fort admirably as Peterson transitioned to teams like the New Orleans Saints, Arizona Cardinals, and Washington Football Team after 2016.

In fact, Cook ranks second in the NFL via rushing yards and total touchdowns since the start of 2019. Only Derrick Henry tops Cook in both metrics.

“After injuries limited his effectiveness during his first two seasons, Cook has established himself as one of the league’s premier running backs during the past two seasons. Over that span, the former Florida State standout has rushed for 2,692 yards and 29 touchdowns while also catching 97 passes for 880 yards. Cook was briefly in the MVP conversation last season after helping the Vikings bounce back from a 1-5 start. Cook will again be complemented this season by receivers Justin Jefferson and Adam Thielen, who in 2020 combined to record 2,325 receiving yards and 21 touchdowns. Making Cook’s success last season even more impressive was that he did it behind an offensive line that was ranked 26th in the league by Pro Football Focus. Minnesota addressed its line by spending a first-round pick on tackle Christian Darrisaw, who will look to fill the void left by veteran Riley Reiff. If Darrisaw and fellow rookie lineman Wyatt Davis can make an early impact, Cook should once again be at or near to the top of the league’s rushing standings this season.”

Cook, the league’s fourth highest-paid running back per annual average salary, carried the Vikings at their lowest point in 2020. Minnesota vomited out of the gate, losing five of six games inside a season that initially had lofty expectations. Quarterback Kirk Cousins performed poorly for two games at Indianapolis and versus the Atlanta Falcons, the defense was mitigating life without Danielle Hunter, and the lack of homefield advantage at U.S. Bank Stadium gutted the Vikings early-season shot at success. Cook, on the other hand, lifted the team back to relevance, even knotting up the win-loss record to 6-6 by mid-December.

Then, without Eric Kendricks, the group faceplanted once again, disabling any chance of postseason activity. Cook, though, played wonderfully. He remained mostly healthy for the second year in a row – an important feat after Cook missed 53% of all football games during his first two seasons. From 2019 to present, Cook has played in 88% of all contests.

Cook can maintain a puncher’s chance at breaking Dickerson’s record for one simple reason: The Vikings love to run the football. During a season when the Vikings should have passed a lot – simply because they trailed so frequently – Minnesota ran the football 46% of the time, which ranked sixth-most leaguewide.

The carries for Cook will be there. But a herculean effort is required to catch Dickerson – no one has done so for 37 years.