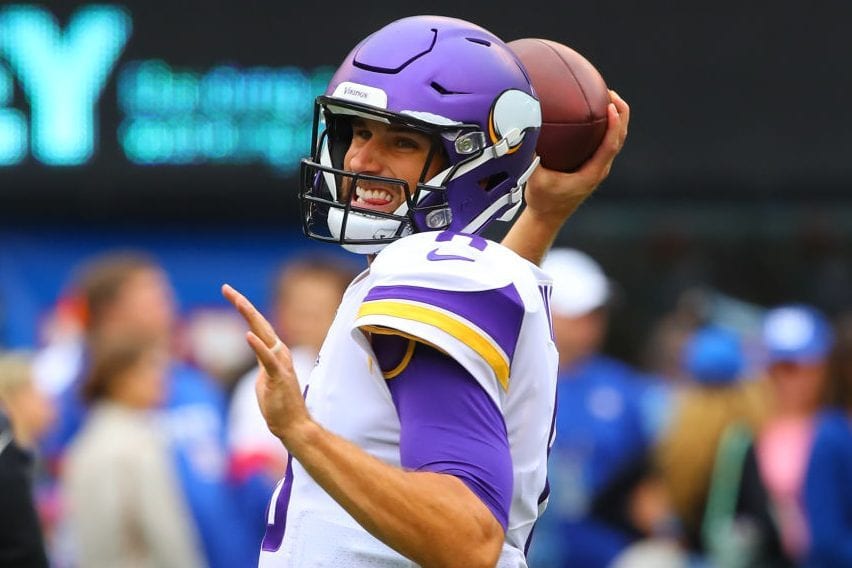 Editor’s Note: This article comes from ‘The V61’ (vikings61.com), a friend and partner of Purple PTSD and Vikings Territory! Check out them out daily for news, analysis, and history of the Vikings!  Follow the V61 on TWITTER here!

Against the New York Giants last Sunday, Vikings quarterback Kirk Cousins seem confident, loose and accurate. He credits his performance with a newly aggressive attitude. Where’s it been?

Everybody’s seen–or heard–quarterback Kirk Cousin’s now-famous inquisition while coming off the playing field as the Redskins quarterback in 2015. Cousins had just rallied the Redskins from a 24-0 deficit to beat the Tampa Bay Buccaneers 31-30. It was the largest comeback in franchise history.

Four seasons later, Minnesota Vikings answer that rhetorical question with an exhuberant yes. Of course we like that, Kirk.  But as fans of this team, we were wondering where you’ve been hiding the fire.

To say that Cousins has been tagged with adjectives like tentative, sheepish, and downright gun-shy is like saying wide receiver Stefon Diggs has been surly about his lack of targets in the Vikings’ offense.

Cousins decided to play the game of the season in New York last week, going 22 of 27 for 306 yards and 2 touchdowns.  His QB rating was 138.6 and his attitude was a bit edgier than usual. In fact, Cousins himself told KFAN radio this week that he felt that he played better when he was “ticked off.”

Well, having your head handed to you in Chicago and a full week of distinctly critical press will do that to you, Kirk.

“If I knew that, I’d tick him off myself.” Zimmer replied: “I don’t listen to his radio show.”

All of this is a bit of fun. The serious stuff begins when Cousins and the Vikings’ offense meets a Philadelphia defensive front that ranks first in the NFL against the run, allowing only 63 yards a game. The Philly D is also coming off a ten-sack performance at home against the New York Jets.

Eagles defensive coordinator Jim Schwartz may not have a blueprint of this Vikings offense, especially it’s remarkable run success, but he does know this team and its coach well, having been the Detroit Lions head man for five seasons before taking his job in Philly.

The Eagles’ still sports two menacing athletes named Fletcher Cox and Brandon Graham on their defensive line, as well as a safety named Andrew Sendejo, who is reportedly spilling the beans on what he knows of Mike Zimmer’s defense to whoever’s listening in Philly.

Against the Giants, Cousins took a few sacks of his own, but none were crucial, none created turnovers, and none kept the Vikings’ from consistently fooling New York on a series of bootlegs, screens, and play action passes. Was this attitude, design, or both–with a dash of moxie?

Because that’s kind of what the Wilfs thought they were paying for when they wheeled the bank up to your door.

What remains to be seen is whether Cousins’ ‘new’ personal demeanor will aid him in the heat of battle against an opponent more formidable than the one he faced in the Meadowlands last Sunday.

For what it’s worth, fans, teammates and coaches certainly like the character–and the results–of their quarterback’s posture towards doing his job–and most certainly prefer it to the one we all saw in Soldier Field two Sundays ago.

You see, Cousins has done some very nice things at the QB position in his career. Take a moment here to look over a game from 2017, week nine, against the Seahawks in Seattle, where the then Redskins’ signal-caller showed the temperament and skill to win in a tough town.

When it comes to the Eagles and Philadelphia, the message is clear. Take no prisoners, Mr. Cousins, we’re all behind you.