The Vikings beat the Arizona Cardinals 20-9 at home at U.S. Bank Stadium in their third preseason game Saturday afternoon. That is the lead, but the body of the story is a much more sordid tale to tell. The Vikings looked lackluster in their “tune-up” game on both offense and defense and don’t yet look ready to take on the Atlanta Falcons in Week 1 of the regular season on Sept. 8.

It probably didn’t help that I was at the game in fan-like fashion sitting in the seats with my brother Bill rather than at home and able to go outside on a beautiful day rather than watch more of the first-half slog. I felt like head coach Mike Zimmer, who came away from the game wanting for more from just about every part of his first team.

How bad did it get? Late in the second half the most interesting conversation between my brother and myself was about the over-the-head camera that zips back and forth during the game to capture that unique perspective of the action. We even discovered the thing is called “Wildcat” since we had our binoculars trained on it rather than on Kirk Cousins trying (unsuccessfully) to find another open receiver amongst the Cardinal’s defense.

I jotted down notes on the game and Bill looked to see where the ziplines were located for the camera. Here is what I saw:

Kirk Cousins and the offense did not look good, save for an 85-yard touchdown run by the heretofore unseen Dalvin Cook. It was so exciting a play that my nephew’s girlfriend (sitting next to my brother) stood up too quick, got a little light-headed and fell into the fans in front of her. She was fine (as were the other fans in front of her), but the Vikings first team offense was not and they left the game at the end of the first half with a 9-7 deficit.

To be sure, the run was all Dalvin Cook (and it was great to see him back on the field), as he took a run designed to go left, saw a big hole right, cut back past several Arizona defenders and then raced virtually untouched for the longest TD run in Vikings preseason history. It was great to get some Cook on tape so the other teams have to remember how good he is and start preparing for him as well as simply game planning around the Vikings’ great receivers.

The defense did not show much spark, as Zimmer complained they hadn’t earlier in camp, and Cards rookie QB Kyler Murray gave them fits running all over the field and finding open receivers—if only Kirk could do more of that.

(Incidentally, Murray looks like the real deal and should make a nice late-round QB pickup in fantasy football this season. He has all the throws and will definitely make some points with his feet this season. He won’t be the next Patrick Mahomes, but give him a little time and he might be just as fun to watch.)

The defense, in their defense, did another of their bend-don’t break kind of performances, giving up three field goals rather than touchdowns. But I wish when facing a rookie quarterback and a team that is kind of in rebuild mode that they would quit bending at all.

The offensive line did much better with run blocking this week, but the passing game suffered, as Cousins experienced his first sack of the preseason. The starters won’t be playing next Thursday, but maybe they should as they have not yet had a complete performance in the preseason. They need Brian O’Neill back for the first game and the interior of the line needs to play better.

So, then we moved onto the second half (when we eventually experienced the Wave as another indication of the excitement level at the game) and things heated up a little. Quarterbacks Sean Mannion and Kyle Sloter got their opportunities and neither did much to clear up the battle for QB2. Mannion looked more in command this week than last week (in my opinion), suffering a drop here or there after decent passes, and Sloter played better after the criticism from Zimmer last week, leading the team to a late-game touchdown (exhibiting nice touch on a screen pass to Khari Blasingame for his third TD in three preseason games). This battle will likely come down to the next game.

Some other players of note:

Mike Boone continues to impress with 10 carries for 41 yards and some great special teams work; Jayron Kearse didn’t get the “mail-it-in” memo and had two very good pass defenses—plus what should have been a fumble return for a touchdown if it weren’t for a quick whistle; Olabisi Johnson turned in another very good game (three catches for 52 yards) and appears to really be pushing Chad Beebe (who had a drop) for WR3; and Jordan Taylor got on the board with a couple grabs for 189 yards.

New kicker Kaare Vedvik got a chance to shine and missed two field goals (43 and 54 yards), and Zimmer mentioned them in his post-game chat with KFAN; Xavier Rhodes looked slow, injured or, heaven forbid, too old for his job today. There is something going on with him regarding his ability to catch up to a player who has gotten a step on him. This former forte of his appears to be missing—hopefully it is just preseason malaise.

All-in-all, the third preseason game, which is usually the most important for the starters, left those fans in attendance (the house was not full which had more to do with nice weather outside than anything, perhaps) on pins and needles and not in a good way. The starters won’t be on the field Thursday night, so we will have to live with this one stuck in our craw for a couple weeks until the real action beings. Hopefully, the Vikings are just holding back and weren’t showing the Cards their cards too early, because, if not, on Sept. 8th it will be too late. 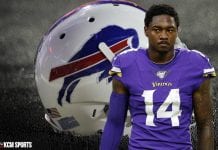