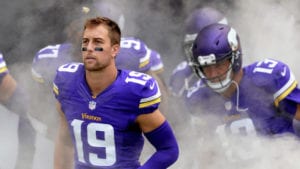 Vikings loyalists have had six months to cope with StefonDiggs-related resentments that spawned from the Buffalo Bills trade. The 26-year-old Diggs was a spoonful of pizazz and creator of Miracles that made the Vikings wide receiver room one of thrills.

He doesn’t play for the Vikings anymore.

His Gotham-like partner, Adam Thielen, was traded nowhere and will now singularly headline the Vikings wide receiver corps for the very first time. Thielen spent nearly half of the 2019 season nursing an injury [that he suffered on a bittersweet touchdown grab] and seeks to return to his 2018 supremacy. Just two years ago, Thielen hauled in 113 receptions – the same number of catches that Julio Jones snagged in 2018. That’s right, Adam Thielen was statistically about the fifth-best wideout in all of the land.

During his injury absence, the NFL, its punditry, and even some Vikings faithful decided that Stefon Diggs was the superior wide receiver, all but nullifying or blatantly ignoring Thielen’s 2018 accomplishments. What have you done for me lately?

In just one week, Thielen will escort the following Norsemen into U.S. Bank Stadium: Chad Beebe, Dan Chisena, Justin Jefferson, Bisi Johnson, K.J. Osborn, and Tajae Sharpe. Is this group capable of propelling the Vikings to an extended playoff run?

This assertion is not whimsical nor is it rooted in an unabashedly “homer” frame of thought. The evidence that Minnesota can thrive with Adam Thielen and Co. is of a very recent variety.

For starters, the only team in the NFL that boasted a winning record while showcasing two separate 1,000+ yard wide receivers in 2019 was the Los Angeles Rams. And, they didn’t even make the playoffs. Next, if one classifies an AFC or NFC Championship as a deep playoff run, the evidence mounts skyward.

Mike Vrabel’s Titans in 2019 ruined dreams and ended legacies of the Baltimore Ravens and New England Patriots, respectively. Tennessee rudely dismissed Tom Brady from the 2019 AFC Playoffs and from the city of Boston altogether. After that, Vrabel and his defense temporarily solved Lamar Jackson – a task no team had effectuated until that January night.

Did the Titans use high-octane wideouts to slay the northeastern Goliath and tame the league’s MVP? No, they handed the damn ball to halfback Derrick Henry 64 times in two games. It’s the reason they were victorious.

What the Titans achieved in 2019 is almost a utopian vision for Vikings head coach Mike Zimmer. Run the football, play defense, control the lock, protect the ball, ask QB1 to do make plays when needed.

The Titans came within a game of the Super Bowl with Brown, Davis, and Humphries as the team’s wideouts. Thielen, Jefferson, and Johnson can do that, too.

In west Missouri, tight end Travis Kelce hogged all the 2019 receiving yards for the Chiefs. He accrued 1,229 of those yards.

Apart, Vikings tight ends Kyle Rudolph and Irv Smith Jr. will not reach this obscene receiving yards total. Yet, if they pile their resources together, per the plan, the two men have areasonable shot at nearing Kelce’s mark. That theory is largely predicated on Smith Jr.’s instant development, which is a tall order. But Smith Jr. does possess the raw talent to mature into a pass-catcher akin to Kelce down the line.

Can Adam Thielen snatch 860 receiving yards like Tyreek Hill? He better. Between a mashup of Justin Jefferson and BisiJohnson, can the two emulate Watkins-Hardman numbers?Probably.

The 2019 Chiefs won the Super Bowl because of hot defensive play, the ascending legend of Patrick Mahomes, Travis Kelce, and a one-hit-wonder in Damien Williams playing out of his gourd. The championship was not culminated on the backs of two star-studded wide receivers.

Each year on February 14th, Americans celebrate Valentine’s Day with their sweethearts. It’s an amorous tradition.

Around the same time, another lovable tradition transpires. Fans of the Green Bay Packers gather together and explain why the team did not win the Super Bowl, and how it was not Aaron Rodgers’ fault. Some years it’s a headstrong, out-of-touch head coach to blame. It might be that the defense wasn’t up for the task of the big game. Maybe the running back was subpar that season. Perhaps the NFL referees were conspiring with malice aforethought.

The takeaway is consistent: Aaron Rodgers has nothing to do with the team’s shortcomings. Last year, the talking point was that Rodgers did not have a prolific group of wide receivers. If that justification is true, the 2020 campaign will be no different. Green Bay entered the 2020 NFL Draft, one soaked in wide receiver talent, wish bold aspirations. Their execution of this plan led them to Aaron Rodgers’ replacement, Jordan Love.

Even so, the Packers reached the NFC title game with Adams, Lazard, and Valdes-Scantling. This is a serviceable assemblage of pass-catchers, although Green Bay residents will assuredly disagree next February.

In comparison to the Vikings, the Packers wideout trio is not ostensibly better, if at all.

This is a trend. Maximize tight end production, run the football, ask your defense to get hot in January, limit turnovers, and put the ball in your quarterback’s hands for clutch plays down the stretch. These are likeminded ingredients to a Lombardi trophy recipe.

The 49ers teased fans with this formula but squandered a lead away to the Chiefs last February. For the purposes of this analysis, that is irrelevant.

Deebo Samuel, Emmanuel Sanders, and Kendrick Bourne – catching tosses from Jimmy Garoppolo – were the men from the wide receiver room that represented the NFC in last year’s Super Bowl.

Let’s just hope that Kirk Cousins plays somewhat like Patrick Mahomes in a few big spots. After all, Cousins threw the same amount of touchdowns (26) as Mahomes did in 2019. And, Mahomes threw the football 484 times to Cousins’ 444 pass attempts.