Bridgewater Is the Perfect Backup QB 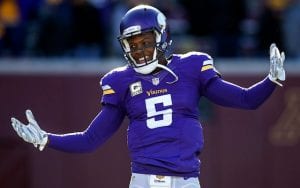 Recently, there have been some rumors that the Carolina Panthers may be moving on from Teddy Two Gloves. The Panthers recently traded for Sam Darnold, the third overall pick from the 2018 draft. They don’t make this move unless they believe Darnold could be their solution at QB. It’s safe to say that things really didn’t work out in New York, and perhaps Carolina will go more smoothly. In other words, things don’t look great for Bridgewater in Carolina. If Teddy Bridgewater is cut, the Minnesota Vikings should be supremely interested.

We’ve already discussed how the Vikings really do need some help at backup QB. A few days ago, the options seemed to be mostly constrained to one of the two young practice squad guys — Nate Stanley or Jake Browning — or Sean Mannion. Otherwise, it was going to have to be a journeyman quarterback. Bridgewater, though, presents far more upside than any other option out there.

He was chosen 32nd overall in the 2014 draft. The good folks over at Pro Football Reference remind us that Minnesota had to trade their 2nd and 4th to Seattle to hop back up into the first round. Keep in mind that this was the first draft with Mike Zimmer as the head coach. Anthony Barr was chosen earlier in RD1, and it’s long been clear that Zim loves both Barr and Bridgewater. Zimmer has openly discussed how he originally believed he’d only ever coach Bridgewater.

Now, it goes without saying that Bridgewater isn’t the most gifted player on the planet. He doesn’t have the physical gifts of someone like Aaron “Voldemort” Rodgers or Patrick Mahomes. What he does have, though, is top-tier intangibles and some above-average athleticism. At the end of the day, what’s really the most important thing for a backup QB? Case Keenum showed us in 2017 that what really matters most are the intangibles. Someone who can step in and lead the offense. That’s what matters.

It’s entirely possible Teddy Bridgewater is traded, meaning the Minnesota Vikings are out of luck. At this point, though, a trade might be hard to pull off. Many of the most QB-needy teams will be getting their solution in the draft. Teams who would be open to bringing in a steady vet are dealing with the Covid Cap. It’s a really tough spot for Bridgewater.

If you go to Over the Cap, you’ll see that Bridgewater currently carries the biggest cap hit in Carolina. Cutting him leaves behind $20 million in dead money. It’s a massive number; Carolina could lessen the 2021 impact by designating Bridgewater as a post-June 1 cut. It’s fairly obvious that Carolina isn’t winning anything during this upcoming season, so perhaps they’d be open to taking on the massive dead money hit as they gear up for 2022 contention.

Recently, Dustin Baker discussed the various options for Bridgewater: “Should the Panthers wish to sever ties altogether and eat that dastardly cap hit, then Bridgewater could go anywhere. The Houston Texans, Minnesota Vikings, New England Patriots, and Tampa Bay Buccaneers all make sense on paper for QB2 roles.” Baker goes on to very rightly suggest that Bridgewater would be a “damn good backup quarterback.”