As the saying goes, hindsight is 20/20. It’s easy to question a coach’s decision after the fact, but making that decision in the moment is one of the toughest. Every choice throughout a football game is liable to be scrutinized, and Mike Zimmer’s choice to go for it on fourth down with the game on the line is no exception.

In the moment, and especially after seeing the play, my gut was screaming “just kick the field goal!!” Even after taking some time to think it over, I think in a vacuum, kicking the field goal was the right choice there. Going up eight points, with overtime as the worst case scenario, is about as good as you can hope for when playing against a guy like Russell Wilson on the road.

Through the scrutiny, Zimmer has not backed off however, and he has instead doubled down on his choice to go for the fourth down, telling reporters, “you don’t have time to ask analytics guys what to do” and “I’ll do it again the next time it comes up”.

I can’t blame him. The Vikings’ philosophy all night was to do everything they could to keep the ball out of Russell Wilson’s hands. It was the third time the Vikings had attempted to convert on fourth down, and they had done just that the previous two times. Both were part of long drives that led to scores. You have to respect a coach that sticks to his philosophy.

I respect the decision even more after analyzing the play a few more times. This is what the pre-snap alignment looked like on both sides. 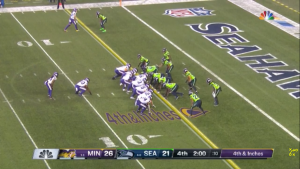 The Vikings had been running the ball to the left all night, including on a previous fourth down that they had converted. Because of this, the Seahawks defense lined up left to stop them from going that direction. 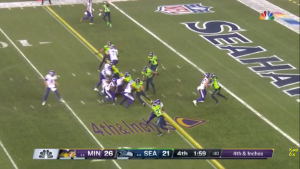 No problem, the Vikings would run to the right and try to catch them off guard and end the game. 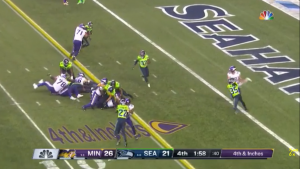 The problem is, by cutting between guard Dru Samia and tackle Brian O’Neill, Mattison ran right into the waiting arms of linebacker Bobby Wagner. I still have no problem with the play call, though. What I do find an issue with is Mattison’s decision making. You may figure out why with this next picture. 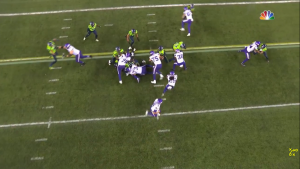 C.J. Ham does his job and opens up the right side by taking out linebacker Cody Barton. All Mattison has to do is bounce to the outside of Ham, and he has a first down, and quite possibly a touchdown. Instead, Mattison cuts back inside towards the waiting Wagner and Benson Mayowa, who sheds the O’Neill block.

Sure, things may have turned out differently if the Vikings decided to kick a field goal, but I think that this instance just sheds light on the fact that coaches are going to take blame no matter what happens. Coaches can only make the right play calls, they can’t go out and run the plays, too. Sometimes blame belongs on players just as much as it does on coaches.