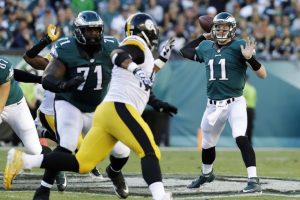 Carson Wentz throws a pass against the Pittsburgh Steelers in their NFL matchup. (CHRIS SZAGOLA/AP)

After Week 4 where COVID-19 dominated the headlines and altered the NFL schedule, Week 5 is here. The coronavirus is still a hot topic around the league, as it was reported that Titans players had a player workout outside of the team’s facility last week. It was reported that the team has another positive test on Thursday. This puts their game this week against the Buffalo Bills in jeopardy.

The New England Patriots have two important players on their team who also tested positive for COVID-19. Quarterback Cam Newton and cornerback Stephon Gilmore both have the coronavirus but are asymptomatic. The Patriots shut down their facilities on Wednesday after Gilmore’s positive test result.

It seems that the players and coaches became content and let their guards down the past couple of weeks. The NFL has warned teams and their players of harsher penalties for failing to adhere to health protocols the league and the NFLPA agreed to.

As of now, all games are on track to start at their scheduled times. Individual players might miss time due to positive COVID-19 tests. Some teams will surely feel the impact of this. Nevertheless, Week 5 brings another helping of interesting games.

My selections came out better than I expected in Week 4. Andy Reid and Bill Belichick’s coaching battle was essential to how the game progressed. Philadelphia put it all together to come back for their first victory. The Texans’ loss to the Vikings (amongst other things) cost Bill O’Brien his job, as Houston fell to 0-4. What is in store for the fifth week of the season?

State bragging rights are on the line this Sunday in Pennsylvania. The Eagles will travel to Heinz Field to take on the Steelers. The Steelers have had a wild couple of weeks as they were supposed to play against the Titans before their coronavirus outbreak.

Instead, they had an early bye week and will now play 13 straight games, starting with Philly. The Eagles are looking to gain momentum after defeating the San Francisco 49ers for their first win.

Pittsburgh is undefeated and looking sharp early in the year. Ben Roethlisberger seems to be like his 2018 self, throwing for 777 yards, seven touchdowns, and just one interception. The receiver cast that includes Juju Smith Schuster has benefitted from Big Ben’s return.

The Eagles pass defense has been much improved this season and faces a tough test in Roethlisberger. The pass rush of the Eagles has been great so far this season, and they will need to continue their efforts in this game.

The Eagles have put the quarterback on the ground 17 times this year, tops in the NFL. They had five last week against a good 49ers offensive line, so the confidence is there. The Steelers allow 1.7 sacks per game, the tenth most in the NFL. Getting to Roethlisberger is key in stopping the Steelers offense.

The pressure Philly creates with their pressure can result in interceptions like it did last week. Getting turnovers gives Carson Wentz more chances on offense. Philly’s offense needs all the chances it can get because of who they are up against and their struggles.

Injuries to the offensive line have decimated the Eagles offense. Their pass protection is porous, allowing 14 sacks this season. That is tied for third-most in the league. Wentz has struggled behind the banged-up o-line, throwing 7 interceptions and having the worst passer rating among quarterbacks in the NFL at 66.9.

The Steelers defense is second in sacks with 15 and first in pressures with 59. Wentz might be running for his life by the game’s end due to Pittsburgh’s relentless pass rush.

The bye week was an unexpected one for Mike Tomlin’s crew, which could impact how they start this game. It wouldn’t be surprising if there is slight rust coming from Pittsburgh initially.

Philly needs to take advantage of their momentum and the potential of rust from the Steelers. Getting out to an early lead could go a long way in what could end up being a game decided in the trenches or on defense.

Both the Browns and Colts are coming into the Week 5 matchup playing strong on one side of the ball. For the Browns, it’s their offense, and for the Colts, it’s their defense.

Starting with Cleveland, the offense shredded the Dallas Cowboys in a 49-38 win. The Browns score a lot of points, averaging 31 a game this season. That is the fourth-most in the league.

In their game against Dallas, Odell Beckham Jr. had a reemergence, catching five passes for 81 yards and three total touchdowns. Kareem Hunt also filled in for Nick Chubb nicely, scoring 2 two touchdowns. The plethora of touchdowns won’t be easy to obtain against what could be seen as the best defense in the NFL.

Indianapolis’ defense has been putting the clamps on opponents this year. This unit is allowing an average of 236 yards per game this season and only 14.6 points per game. Both are the best in the NFL.

They have seven takeaways, tied for third-most in the league. Cleveland will be the best offense they faced so far this season by a sizable margin. Can Indy’s top-ranked passing defense slow down Beckham, Landry, Hooper, and company?

A better question is can the Colts offense get themselves going? They have been lackluster at best, and the stats show they have been a middle of the road offensive bunch. Phillip Rivers hasn’t stood out, throwing four touchdowns, three interceptions, and 984 yards.

The defense has performed so well that the offense has been overlooked, but it needs to improve. Maybe Rivers can ignite the passing game against Cleveland, as they give up the third-most passing yards in the NFL this season (310.5). Getting T.Y. Hilton, Jack Doyle, Trey Burton, and others more involved could result in a big day for Frank Reich’s offense. That could be useful in the scenario this game becomes a shootout.

Both teams are 3-1 and have aspirations of continuing their strong start. It’s not often you have a Browns vs. Colts matchup where both teams have records of .500 or better. Even though it’s early in the season, both have shown that they have the potential to be a playoff team. Depending on how the season turns out, this game could have a factor in playoff seeding.

Monday Night Football is where the best primetime matchup is for Week 5. Rookie Justin Herbert gets his first start under the lights against Drew Brees and the New Orleans Saints. The Saints got a win in Detroit last week behind an all-around solid offensive performance. The running and passing game both played well, and Drew Brees looked more like his normal self.

Brees finished the game with 246 passing yards, two touchdowns, and an interception. Michale Thomas didn’t play, and Brees used this game to gain chemistry with Emmanuel Sanders. Sanders, who was signed this past offseason, caught 6 passes for 93 yards last week, a positive sign.

Alvin Kamara and Latavius Murray shared the running responsibilities and it worked out well for the Saints. Both backs combined for 147 yards and three scores in Week 4. The Saints offense could continue the positive trend against a Chargers defense that is coming off an awful performance.

L.A.’s defense gave up a 17-point lead against the Bucs last week where Tom Brady shredded them for 369 yards and five touchdowns. They also gave up 111 yards on the ground to Ronald Jones and 122 yards receiving to Mike Evans. With them playing on Monday night, the Chargers have an extra day to fix the issues plaguing their defense. Their run defense hasn’t been strong all year and could experience more troubles against the tandem of Kamara and Murray.

Justin Herbert has been impressive in his first three starts with 931 yards, five touchdowns, and three interceptions. He has thrown the deep ball exceptionally well, taking the top off of defenses.

The Saints are mediocre in terms of pass defense, meaning Herbert could have another big day. He will need to because running back Austin Ekeler is going to miss the foreseeable future with a hamstring injury. Keenan Allen has been stellar, becoming one of Herbert’s favorite targets. Him going against Marshon Lattimore should provide entertaining action.

After Week 5, Justin Herbert would have faced Patrick Mahomes, Tom Brady, and Drew Brees in three of his first four starts. That is quite the trio of quarterbacks to face to begin your career.

All eyes will be on Herbert for this game, and a lot can change for him and the Chargers if they can upset New Orleans. This game could be moved to Indianapolis because of the Hurricane Delta that is projected to hit the New Orleans area this weekend.

The games seem to get better and better as the NFL season rolls on. Week 5 is around the time the real contenders begin to separate themselves from the pretenders of the league. Some teams need to make a statement this week with their performance to solidify themselves as true contenders to themselves and others. Make sure to enjoy the weekend of NFL football and tune into these three games if you can.