Home Minnesota Vikings Opinion Analysis Are the Vikings the best drafting team in the NFL? 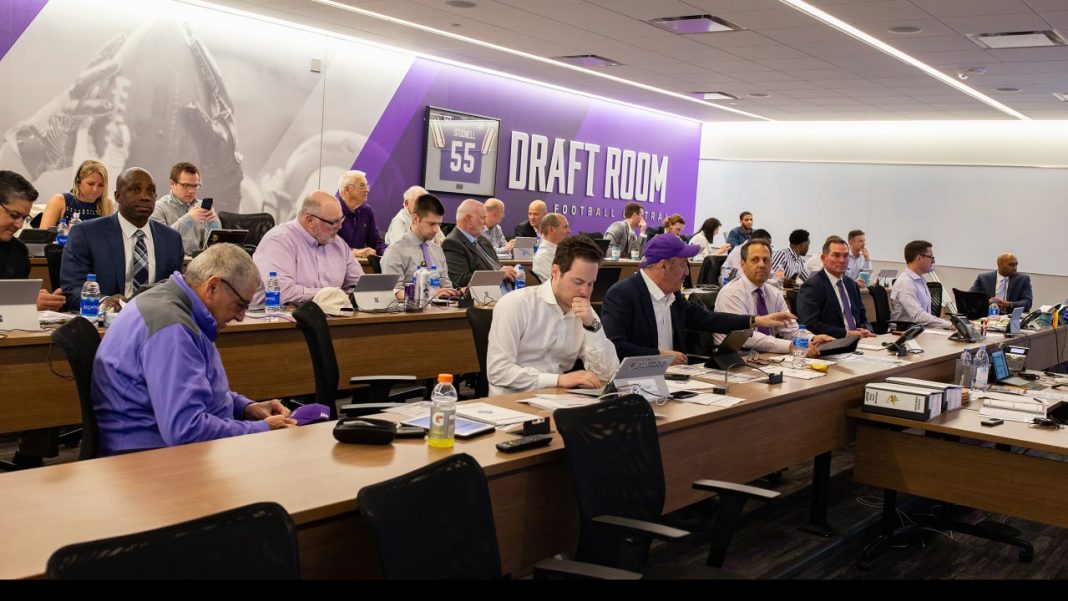 Are the Vikings the best drafting team in the NFL? You certainly can make a case for it. Draft guru Mel Kiper Jr. thinks they have one of the best front offices in the NFL and made that point during the draft coverage this year. Trader Rick is the best in the NFL in acquiring draft picks, but what about the quality? It is one thing to get the picks it is another to pick wisely.

I like the Viking’s philosophy of taking the best player regardless of position. That said everyone knows that the Vikings, like all other teams, strongly weight their player analysis process based upon their position needs. This also makes sense. Why would a team take two left tackles at the top of the draft even if they are the best players available when they have a good one already? Both the quality of the player and the position has to be considered.

Not every pick will be a winner and most draft picks never play in the NFL, there are too many variables in player analysis. Even in the first round about half the picks each year turn out to be either mediocre or complete busts. But a good team should find a way to get one or two starters and a couple of backups or role players from their draft. A team can also add to their draft success by competing and signing undrafted players who by their analysis have a shot at making the team and developing into a good player. This too is part of the overall draft process.

This year’s draft is in the books, but we won’t know about them for a while. Bud Grant says that you can’t fully judge a draft until about three years after, but let’s take a look at the five previous years starting in 2015.

The Vikings had ten draft picks in 2015. It was a stellar draft. Trae Waynes is a good, not great, CB. He was a good pick and played well for the Vikings. Unfortunately he got paid more than the Purple could or were willing to pay for his services. It was still a good pick. In this draft the Vikings also got four Pro Bowl-caliber picks in MLB Kendricks, DE Hunter, WR Diggs, and the undrafted free agent S Harris. There were also several backups, TE Pruitt, T Clemmings, and LB Robinson.

This draft was golden.

In 2016 the Vikings had only eight picks. Trader Rick didn’t make many trades as this was a weak draft class. The Vikings chose WR Treadwell with their first pick who was somewhere between mediocre and a bust. In the Vikings defense they needed a wide receiver and none of the WR first-round picks in this draft were much to write home about.

They included Corey Coleman drafted by Cleveland, Joc Doctson by Washington, and Will Fuller by Houston. It makes you wonder why they all passed on Michael Thomas who was eventually taken at number 37 in the second round.

All in all, despite Treadwell, this was a good draft.

The Vikes had eleven picks in 2017, but no first-round pick, which they traded away for QB Sam Bradford the former first pick of the 2010 draft who unfortunately could not stay healthy.

In the second round they got a Pro Bowl-caliber RB in David Cook and three starters in C/G Pat Elflein, LB Ben Gedeon, a rising star in LB Eric Wilson who is another undrafted free agent and another probable starter this year in DE Ifeadi Odenigbo. They also got a back up NT in Jaleel Johnson. G Danny Danny Isidora was a backup until traded away and WR Stacy Coley until he was stolen of the practice squad.

This was a very good draft.

In 2018 the Purple had only eight picks. They got a much needed good starting tackle in O’ Neill and two probable starters in first-round pick CB Mike Hughes and undrafted free agent CB Holton Hill, if he can behave himself and stay away from the ganja. These two CBs and cap considerations are why the Purple thought they could part ways with CBs Rhodes, Waynes and Alexander.

This too is a very good draft.

The Vikings had twelve picks in 2019. They already have two starters in C Bradbury and LS Cutting. I think they have three or four more players who could start this year or down the road.

TE Irv Smith Jr. is another potential Pro Bowl caliber player. The G Dru Samia and T Oli Udoh, I believe will start at right and left G this year.

DT Armon Watts is another potential starter and RB Alexander Mattison is a starting RB who happens to be behind perhaps the best RB in the NFL, Cook. MLB Cam Smith, CB Kris Boyd and WR Bisi Johnson are quality backups.

The final tally for the five years is 13 starters of which 6 are Pro Bowl caliber. There are four more likely starters down the road and 29 backups.

Backups tend to leave a team when they think they can get an opportunity to start or the Vikes find a better player and cut or trade them, of the 29 backups 17 remain with the team including the four likely to be starters.

The Vikings are averaging 5 players per year on their roster of which 2.6 are currently starters and 3.4 if the those I have named as likely starters starters pan out.

This gives the Vikings a complete roster replacement rate through the draft of just seven years!

The Vikings are the best at acquiring draft picks and they do use them well. If someone isdrafting better than this I am not sure who it could be. The Vikings front office, as Mel Kiper Jr. says is “one of the best in the NFL.”