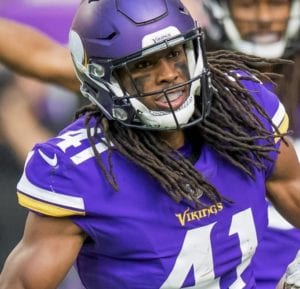 With Xavier Rhodes possibly missing time due to a hamstring injury, and roster space needed to promote CB depth, Andrew Sendejo was sent to IR on Tuesday. That means the rest of the season belongs to Anthony Harris, the backup-turned-breakout free safety that went undrafted in 2015.

Harris going undrafted was somewhat of a surprise to the draft community. Lance Zierlein had him going in the 3rd or 4th round. But reading Zierlein’s breakdown, it makes sense why teams wouldn’t want to spend capital on him, and contextualizes why his excellent play to this point is so meaningful:

Stiff, upright backpedal. Can be passive as deep safety, continuing to drift despite play unfolding underneath. Plays upright and loses leverage when tackling. Grab-and-drag tackler. Rubbery arms fail to finish when tackling at an angle.

At 6’1”, 183, Harris was always going to be a rangy centerfield type safety. But with issues tackling and shaky deep field mechanics, no team would trust him as the last line of defense on the field. So he ended up in Vikings camp, a developmental project with at ton of issues to fix.

The rest of the story is familiar – a start in Arizona down the stretch in 2015, some spot duty here and there, a major run stop on 3rd and 1 to set up the Minneapolis Miracle, and a hefty dose of starting play in 2018. That last part is going unbelievably well.

A good safety – think Ha-Ha Clinton Dix or Rodney McLeod – gives up a catch every 35 coverage snaps or so. Harris has given up a catch just once in 164 snaps. That ranks second in the league to Malik Hooker. Here’s that one catch:

Pictured: The only reception Anthony Harris has given up so far in 164 coverage snaps. Only Malik Hooker has been more of a black hole at safety. pic.twitter.com/G24xTv6r2B

Harris, at safety, ends up manned up with Michael Thomas, who runs his route way too shallow for Harris to have a chance. A play well-equipped to beat cover 1 man coverage. The rubbery arms and stiff tackling criticisms seem to have entirely evaporated over the last 4 years.

In those 164 snaps, Harris has been targeted just five times (6th fewest), broken up two plays and has three interceptions. Put simply: throwing at Harris has been a catastrophe for the poor quarterback who underestimated the backup. You may notice that two PBUs, three picks and one completion equals six plays – that’s because one of the PBUs wasn’t even thrown into his coverage, and he made the play anyways.

Here’s all 22 of all of those plays – apologies for the disastrous Soldier Field A22 angle.

Every throw into @HOOSDatDude's coverage in 2018, and even one that was into Gedeon's coverage but Harris got his hands dirty anyways pic.twitter.com/otLRWQbkpV

What’s excellent is that this relatively short reel is filled with examples of Harris aggressively attacking the ball, placing himself in position at the catch point and being physical when necessary. The draft knocks that caused him to fall into free agency have been washed away by his own hard work, and the guidance of Jerry Gray and Mike Zimmer.

The sample is still relatively small to make any declarations about the future of Anthony Harris’s play. But there’s no arguing against what we’ve seen so far. Anthony Harris is playing at an elite level. Full stop. If you put a Seahawks #29 on him for these plays, nobody would look twice. With a banged up, aging starter, the 27 year old picked an excellent time to break out.