Anthony Barr Is Back, Baby 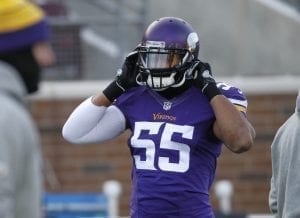 After the 2015 season, linebacker Anthony Barr was a stalwart staple of an elite Vikings defense. Nobody predicted his decline in the 2016 season. Whether it was due to injury, coaching, or “coasting“, Barr’s issues were undeniable. He wasn’t the player he used to be, and many worried that he’d never regain his younger form, much like Matt Kalil or Cordarrelle Patterson. Five games into the 2017 season, it appears that whatever issues plagued Barr last season have passed. For a quick and concise look, we can use Pro Football Focus’s grades:

Spot the outlier! While PFF grades can be volatile, they tend to even out over the course of a season- a large sample can dilute errors or blemishes. If you’re still not the kind of person to trust PFF, simply apply a generous margin of error to the overall result. While any of these grades could hover ten points either way, it’s clear that Barr’s performance in 2016 looked nothing like his electric 2015 performance or what he’s laying down now. But let’s dive a little deeper.

It’s exceedingly difficult to evaluate linebacker play. Tackle totals can be misleading, as a player can often play poorly, but still be the first to get there. If a tackling player took a poor angle and got the tackle twenty yards after they could have, should they be rewarded? Similarly, pass defense needs to be considered, but passes defensed or interception totals don’t capture the snap-to-snap value of excellent linebackers. Luckily, we have better tools.

I’ve spoken about run stop percentage a lot on the Purple Journal podcast and hope to cover it eventually on the Pocket Protectors pod. To get run stop percentage, take a player’s tackle total and divide it by the number of run snaps he plays. But only count the plays where the offense was unsuccessful (learn more about that and get sad here). By only counting unsuccessful plays, you can ensure that you’re only rewarding a player for tackles that actually hindered the offense’s progress. Barr ranks smack in the middle of the league in this stat, and is decidedly average. But that is a massive improvement over 2016, when he was the 5th worst in football.

While Barr hasn’t flashed in run stop percentage, he’s been a highly efficient tackler. Barr averages 27 tackles between every miss, ranking 6th in the league. That’s a nuts-and-bolts way to ensure that any ballcarrier near you is destined to fail. Last season, Barr only went 7 tackles between misses, ranking 10th worst, a jump of 47 ranks.

Against the run, Barr has been an adequate linebacker at worst and has racked up a few flashy tackles for loss, but his true value has shined in coverage. Currently, Barr averages 0.77 yards per cover snap, good for 12th in the league (fun fact: Kendricks is tied for 7th). He’s been targeted 21 times, and allowed catches on 19 of those, but with Barr’s sure tackling, their impacts have been limited. There have been some memorable stops in the flat that exemplify this.

Barr has been in coverage a little more than he’s been against the run, but that is likely to even out over the course of the year. It’s encouraging that he’s been consistent against both. But don’t let the stats alone convince you.

This is the Anthony Barr we grew to love. Look at that closing speed. pic.twitter.com/feZlTN6GsO

Barr is disciplined in his coverage in the flat, and smothers an otherwise athletic Alvin Kamara several yards behind the line of scrimmage. Kamara shouldn’t be overlooked as an opponent- he’s played well enough to push Adrian Peterson out of New Orleans.

Barr displays incredible vision, reads the play and shoots the gap with unbelievable acceleration. As always, he’s a sure tackler.

And I’ll leave you with this play from Monday night’s win, showcasing vision, burst, and jaw-dropping hustle:

Anthony Barr has been amazing all year. pic.twitter.com/q4xwkrwx6U