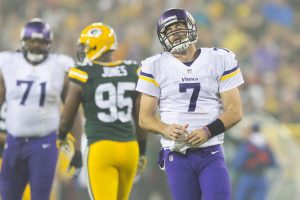 Note: This article originally appeared on our sister-site, Vikingterritory.com. Check both sites daily for the best, most in-depth, Vikings coverage in the business!

For only the sixth time in franchise history, the Minnesota Vikings have started a season 0-3 and already fans are clamoring to make changes at the head coaching position, changes under center and changes in the front office for this team. Some fans, have even jumped on board the “#TankForTrevor” train, and those are the fans that got paid today!

It’s one thing for the fans to jump off the ship and demand change, but what might the organization be thinking right now? Are they considering changes now? Changes at the end of the year? Changes if things keep getting worse?

Today we’ll take a look back at the team’s history of starting 0-3 to see how the organization has reacted to poor starts in the past. Might there be something that we can glean from a history of decisions?

We’ll start back at the beginning. In 1962, the Vikings were just one year into the league and coming off a 3-11 run the season before. Head Coach Norm Van Brocklin was pretty secure in his footing as the head coach of a franchise team and an 0-3 start didn’t bring much concern from the top. Second year quarterback Fran Tarkenton willed his team to back-to-back victories in the middle of the year over the Rams and the Eagles, but the team still finished the season 2-11-1.

All of that led to Minnesota landing the #3 overall pick in the 1963 NFL Draft where they picked DT Jim Dunaway. Dunaway would go on to be a 4-time all-star and a 3-time champion…but he never played for the Minnesota Vikings.

In the same year that he was drafted by the Vikings, Dunaway was selected by the Buffalo Bills in the second round of the AFL Draft. Clearly, he chose AFL over NFL, the Bills over the Vikings and went on to have a historic career…mostly in the AFL.

The Vikings didn’t get any better and continued their losing ways in 1963.

Before the 1967 season started the Minnesota Vikings traded quarterback Fran Tarkenton away to the New York Giants. It didn’t work out too well initially as the Vikings started that season going 0-4. Their new coach was focused on bringing some new confangled schemes in from the Canadian Football League and with that adjustment came losses early.

Things would eventually work out for Bud Grant, who would go on to be the most storied coach in franchise history finishing his career 158-96 taking Minnesota to four Super Bowls. But in ‘67, he took the field with Van Brocklin’s hold overs and spent the season installing and adjusting his schemes for the NFL. With no pressure or questions surrounding the security of his job, Grant found a way to win three games that season and still landed the #1 overall pick in the 1968 NFL/AFL Draft.

With that top overall pick, the Vikings selected Ron Yary out of USC to pair up with the previous year’s first round selection of Alan Page. Both went on to have Hall of Fame careers and were staples through the Vikings dominant run through the late 60s and 70s.

The 2002 Minnesota Vikings were led onto the field by another rookie head coach named Mike Tice. Tice took over the final game of the 2001 season after Dennis Green was relieved of his duties and like Van Brocklin and Grant before him, there was no pressure placed upon Tice after starting the season 0-3…it was almost expected at that point.  With Culpepper, Bennett and Moss leading the offense, Tice’s 2002 Vikings rallied to a 6-10 finish, landing them the #7 pick in the first round of the 2003 NFL Draft.

This is where things got weird.

If you remember, this was the year that the Vikings were late to the podium not once, but twice, falling back to pick #9. It all worked out and they selected DT Kevin Williams who would go on to be a 6X Pro Bowler and was named to the All Decade team in the 2000s.

There was also a change on the defensive side of the football after the 6-10 finish with Willie Shaw being replaced by George O’Leary as the coordinator in 2003.

It’s a similar story in 2011, however this was the first such scenario that occurred under the current ownership group of the Minnesota Vikings. The Wilf ownership group fired Brad Childress in 2010 and named Leslie Frazier interim-head coach, a position that he took over the role full-time in 2011 But the team didn’t take leaps forward early in the season.

Losing six of their first seven games and finishing the season 3-13, Leslie Frazier spent his first season at the helm getting adjusted and acclimating players to his style of coaching and leading. With RGII and Andrew Luck on the board as the projected #1 & #2 picks, the Vikings won a meaningless game in Washington in Week 16 that year and landed the #3 overall selection.

That pick, spent on the offensive line, arguably the most important position outside of QB, was given to Matt Kalil out of USC. Hindsight being 20/20, Kalil fizzled out but it’s fair to remember that he was the consensus pick at that selection. Kalil started hot, but ended his time in Minnesota with a swift kick in the shorts. He was bitter, the fanbase was bitter and it turned out to be a wasted pick in the end.

Most recently, Leslie Frazier’s Vikings started a season 0-3 in 2013. They finished 5-10-1 and it cost coach Frazier his job as head coach. The door then opened for current coach Mike Zimmer to come in and put his imprint on this franchise. With Zimmer, the Vikings also had the 9th pick fall into their laps and they used the selection on Pro Bowler Anthony Barr.

This 2013 season, one of two 0-3 starts under the Wilf ownership group, marked the only time in team history that a coach lost their job after such a poor start. It’s also important to note that just prior to the 2013 season the Vikings had picked up a contract extension on Frazier for the 2014 season.

We’ll have to wait and see if there are ways to make these changes with Kirk under center, or Zimmer at the helm, or Spielman making the decisions.

With Houston, Seattle, Atlanta and Green Bay next up on the schedule, it doesn’t get much easier. We could be in for even more of a rough start if things don’t get turned around. And if that’s the case, we may be in line for dramatic changes going forward with the Vikings. Thanks