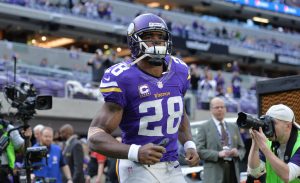 Minnesota Vikings running back Adrian Peterson jogs onto the field before the start of the Minnesota Vikings game against the Indianapolis Colts at U.S. Bank Stadium on Sunday, Dec, 18, 2016. (Pioneer Press: John Autey)

Earlier this week, the unfortunate news emerged that Titans RB Derrick Henry would be need to miss a significant portion of the season (or perhaps all of it). Tennessee is therefore needing to adjust their offense to account for this loss. They’ll undoubtedly place more responsibility on Ryan Tannehill, Julio Jones, and A.J. Brown. Any other strategy would be foolhardy.

That being said, Tennessee is clearly looking to keep their offensive identity similar to what it was pre-Henry injury. To do so, they’re bringing in former Vikings great Adrian Peterson (someone who may be worth considering in your fantasy leagues).

Throughout his NFL career, Adrian Peterson has been far from shy when it comes to discussing his desire to establish himself as the greatest RB in history. Even the most loyal Peterson fan can see that he doesn’t yet have that distinction. Perhaps the opportunity with the Titans will allow him to keep accumulating statistics as he climbs the record books.

As it stands, Peterson is already high on the list of all-time greats. His 2097 rushing yards from the 2012 season rank second all-time. He is fifth in all-time rushing yards over his entire career with 14,820. Barry Sanders is fourth with 15,269 yards, so there’s a realistic chance Peterson could be fourth on the list by the end of the year. For whatever it’s worth, it’s notable that Peterson is still a long, long way from Emmitt Smith’s career total: 18,355. That number seems out of reach, but fans ought to expect Peterson to keep trying for it.

Peterson played with the Lions in 2020, averaging a humble 3.9 yards per carry. Perhaps a stronger Titans offense will lead to a healthier average for AP. In any case, it’ll be fascinating to see what the Titans decide to do to keep their offense rolling. At this stage, Peterson won’t be able to be a true one-for-one replacement. If he can be an above average option, the Titans will still be a tough team to beat.