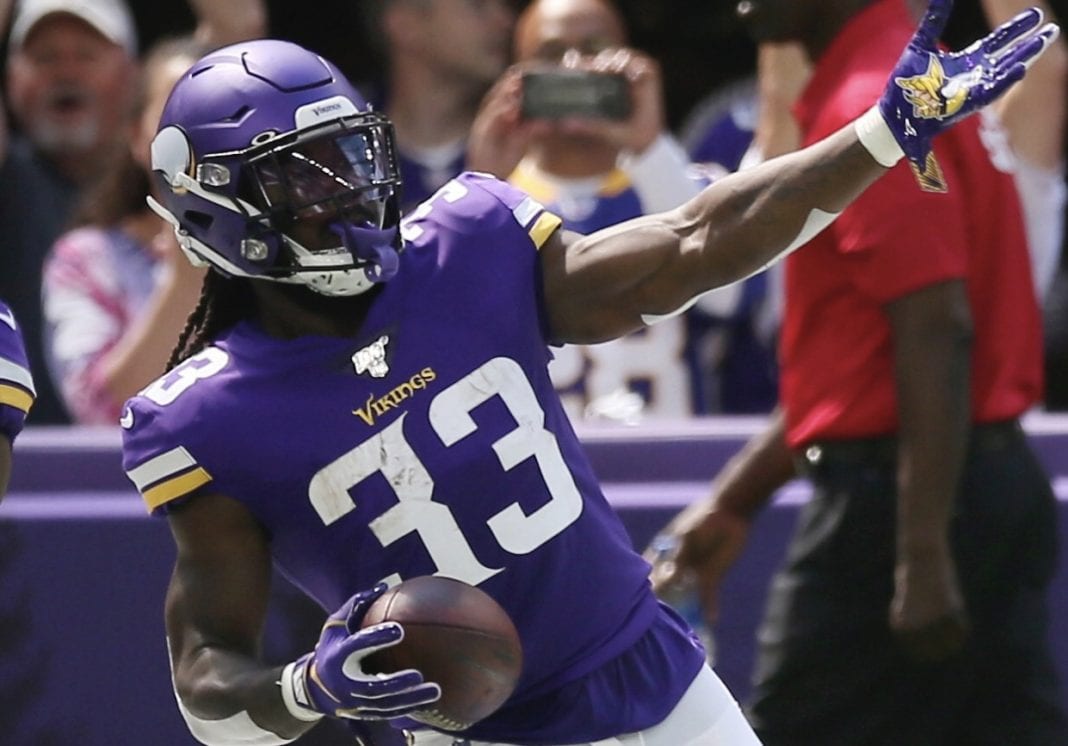 It was an excellent opening week for the Vikings, who dominated the visiting Falcons by a score of 28-12, one that occurred despite Kirk Cousins not even passing for 100 yards! Instead, the Vikings run game took over, with Dalvin Cook and Alexander Mattison combining for 160 yards and two touchdowns on 30 touches (5.3 yards per attempt).

It was a showcase game not just for Cook and the rookie Mattison, but also for offensive coordinator Kevin Stefanski and the Vikings’ run blocking. The line did its part in providing lanes for the Minnesota backfield, and Stefanski’s scheme oozed freshness throughout.

For this article I wanted to take a look at several key running plays against the Falcons before we move onto Sunday’s NFC North showdown at Green Bay. This will take a look at how Stefanski’s scheme constantly set the backfield up for success.

Already we’re seeing maybe what Mike Zimmer could not in former coordinator John DeFilippo, and that’s far better run blocking. It’s week 1 so who knows how long this will keep up, but it’s still encouraging to wide open running lanes.

In addition to the receiving touchdown he had early in the first quarter, Thielen gave a key assist with his last second block to roll out the red carpet for Cook. And Josh Kline deserves a lot of credit for a great block in space as well.

Next let’s switch over to this 23-yard run from Alexander Mattison, which was on the final play of the first quarter.

Once again the Vikings provide their backfield with a giant gap. Let’s see how it all looks in full motion.

The inside zone scheme works to perfection here. Josh Kline (the right guard) makes another outstanding block, while Kyle Rudolph (far left at the beginning of the snap) helps out on #93 of the Falcons (Allen Bailey), providing more running room for Mattison.

In addition to Pat Elflein (left guard), fullback C.J. Ham and Rudolph also pave the way for Mattison on this particular run. Let’s roll the clip.

The individual blocks and efforts made by Elflein (#65), Ham (#30), and Rudolph (#82) make this all too easy for Mattison, who’s stopped just shy of the end zone on another impressive running play.

Lastly, let’s look at Cook’s second and final touchdown run of the day, inside the red zone.

The Vikings use zone blocking again to trick the Falcons into believing this is a handoff to the right. It’s actually a run straight up the middle, and it’s sold incredibly well.

The text speaks for itself.

If you look closely you can see rookie tight end Irv Smith and left tackle Riley Reiff manhandling one of the best young linebackers in the game in Deion Jones (#45). No one comes close to touching Cook out the gate as a result, and after a little push he eventually gets into the end zone for a second time.

I do have my reservations as to whether this will be more sustainable going against Green Bay, who has a more talented defense on paper than the Falcons. Kirk Cousins only passed eight times and was actually hit three times on 12 drop backs, so there’s reason to think the Packers will be a much tougher task to deal with.

Overall, however the Vikings should be pleased with how Kevin Stefanski called things last Sunday. The run blocking was nothing short of spectacular, and it just goes to show how far this unit can go with a run scheme as creative as this.