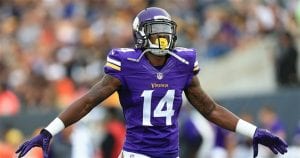 It’s a shame that regression carries such a negative connotation in our lexicon. In concept, it refers to a particularly extreme result that then crashes back to earth. Usually, that means a good thing gets worse, and it’s simply come to be synonymous with taking a step back.

In sports, regression cuts both ways, and is the natural expectation. If a player was better than he usually is in one game, chances are slim that he’ll be even better in the future. However, if someone has a down game, chances are they’ll snap back closer to their average.

So, being on this list isn’t necessarily a bad thing. If they’ve been underperforming, putting them here suggests that they’ll bounce back. If they’re overperforming, that’s great. Coming back to their average is a process of nature.

Kendricks has been one of the better cover linebackers out there over the last couple of years, but in 2018, his coverage has been abysmal. He’s given up 1.43 yards per snap in coverage, ranking 775th among linebackers. That’s more than double his total from 2017. His PFF grades show a similar pattern. But that’s clearly an outlier.

A lot of those yards came on blown coverage plays in his direction – bad mistakes between multiple players that get assigned to only him. While he probably deserves a ding in any of those measures, that kind of communication issue tends to subside as the season wears on.

It’d be unreasonable to expect the 2nd half of 2018 Eric Kendricks to be as bad or worse than the 1st half. It’s already unlikely, given his previous body of work.

It’s been quite the well-documented ride for Adam Thielen. Eight straight 100 yard games has never started a season in modern NFL history. A ninth could even come against an ailing Lions secondary, but eventually, things will have to come back to Earth.

Adam Thielen is dominating the market share of targets right now with 28% of Kirk Cousins’ passes going his way. He’s been targeted more than any wide receiver in the league, and while he’s produced top ten efficiency, teams will begin to scout these Thielen-heavy game plans and prepare accordingly.

The Vikings are running a massive volume passing offense right now as well. Kirk Cousins has dropped back more than every team in the league. That’s unlikely to repeat itself, leaving a smaller pie for Adam Thielen to take a piece of.

While Thielen has out-performed anything he’d done in his career thus far, Stefon Diggs is under-performing. We’re used to enjoying about 1.9 yards per route run from Diggs, landing him in the upper end of wide receiver production. This year, he’s fallen to 1.69, which is below anything we’ve seen, even in his rookie year.

Diggs hasn’t dropped off from an eye test perspective. Watching the film, you wouldn’t expect this production drop off. But considering Adam Thielen’s jump in market share, which should regress, we can also expect Diggs’ market share to regress back up.

There’s a finite amount of targets to go around. When one player dominates, the others will see their production decline. That doesn’t mean they’re worse, they’ll get theirs eventually.

It’s been uncharacteristically bad for Dan Bailey. Even in his down 2017, he still never missed more than five field goals. But Dan Bailey has missed three so far, putting him on pace to beat that. He’s on a slightly better pace percentage-wise than he was in 2017, but it’s still a far cry from his illustrious career.

Field goal kicking is more random than we care to admit, and Dan Bailey, thus far, has been on the wrong side of that randomness. But as is the nature of randomness, things tend to turn around for better or worse. There’s a lot of years of field goal kicking that tell us the Dan Bailey will be fine.

Play under pressure is likely unstable because a lot of the results aren’t owned by the quarterback. Some pressures are easier to handle than the others, some receivers are better than others at catching off-script passes. Cousins could regress or stay right where he is, and neither would be that surprising.