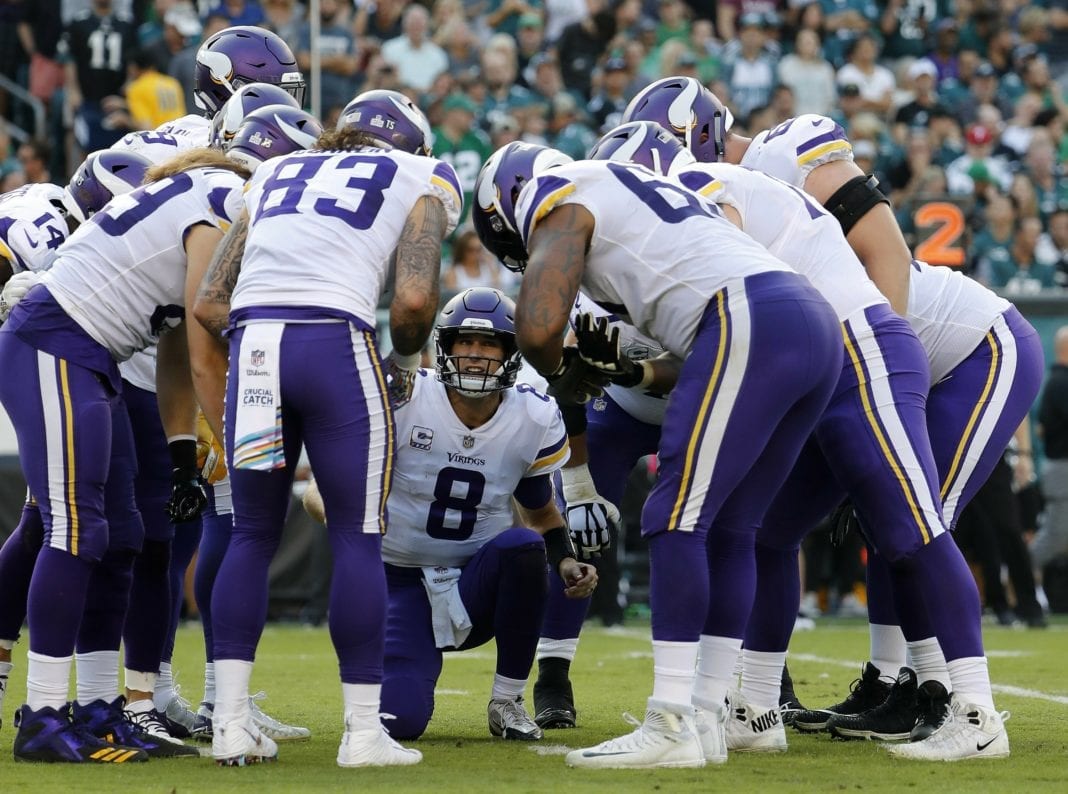 “The difference between a 6-10 team and a 10-6 team is roughly five plays.” This is a myth I set to solve or debunk at the beginning of the year as I wrote my weekly “5 Plays” article. Upon further review, I think it’s safe to say it’s the truth. The Vikings went 8-7-1 and there were crucial turning points in numerous losses. If a ball bounced one way or another, we may still be watching them today. For as bad as the 8-7-1 Vikings looked, try to take solace in the fact that this team was one bounce away from the playoffs and a 2019 turnaround shouldn’t take much.

The bad news is that good teams find ways to recover from these plays. Good teams make it so that a bounce or a penalty do not determine their playoff fate. Now, some of these plays are more obvious than others, but part of the goal is to investigate the little plays that set the stage for the big plays (or lack thereof).

The Vikings lost seven games and tied one. We know that an additional win would have gotten them to the playoffs. To me, only four of those games were winnable. The Bills (gasp), Rams, Patriots and Bears (Week 17) all controlled play and it never really felt possible that the Vikings could win. That leaves us with: The Packers Tie; The Saints Loss; The Bears Loss; The Seahawks Loss. These are the plays that kept the Vikings out of the dance:

Let’s start it off with the easy one. I actually didn’t include this play in my Week 2 column as I looked for the less obvious details that led the Vikings to this point. At the end of the day, though, they tied because Carlson couldn’t make a final kick on the final play of the game. He makes it (Butterfly Effect notwithstanding), this is a win, and the Vikings are in the playoffs.

Next up we have the Saints game, where the untouchable Adam Thielen had his first only mistake of the season. Thielen’s fumble was basically a 14-point swing (checks notes: the Vikings unraveled and proceeded to lose by 10 points). Not only should this win have gotten them to the playoffs, but the momentum and confidence this group would have gained from beating the NFC’s best could have had an immeasurable impact on the season. The Vikings inability to overcome this gaffe was pathetic, too.

Synopsis:  The Vikings had scored on 2 out of 3 offensive drives and looked like they were going to make it 3 of 4. Adam Thielen took the ball on a screen from Kirk Cousins but proceeded to fumble. The Saints took it into Vikings territory where Laquon Treadwell made the tackle but removed his helmet to tack on an additional 15 yards.

What I Wrote Then:  This is an obvious one, but it’s all too important. This is where the Vikings lost the game and will be a play we all look back on at the season’s end if the Vikings fail to meet expectations or make the playoffs. They were about to grab the momentum and go into the half up by either 6 or 10 points in addition to receiving the second-half kickoff. Chances were, Drew Brees wasn’t going to get the ball back until the Saints were down at least 10 points, and probably more. The Treadwell penalty turned what could have been a field goal into a probable touchdown, setting off a series of meltdowns by the team.

Onto Week 10 where the Vikings lost to the Bears, unable to recover from a 14-3 deficit that should never have happened. I get it, it’s hard to say a first quarter play changed the outcome of a game, but if Kirk hits Diggs on the below play, the Vikings take an early lead and the outcome could very well have been different. They lost by 5. This was a 7-point play.

Synopsis: After the Bears took the lead, the Vikings quickly found themselves on the Bears’ side of the field. Stefon Diggs dusted Kyle Fuller on a double move and was open in the back of the end zone, only for Cousins to overthrow him by a few yards.

What I Wrote Then: I can’t stress the importance of an early lead against a team like the Bears on the road. It allows your team to continue their game plan and keep the entire playbook open while putting pressure on the other team. This was a sure seven points that Cousins missed. These are the kinds of throws he’s getting paid to make and it proved costly once the drive ended on a Cook fumble and the Vikings came up empty handed. These missed opportunities put the Vikings in hole they proved incapable of digging themselves out.

4th Quarter, 9:54 – Dalvin Cook runs into Cousins for a gain of one

The Seattle game felt the most winnable down the stretch thanks to the outstanding play of the defense. Ultimately, the Vikings had two chances to take the lead. The first chance was when they ran two plays form the two-yard line that they failed to convert. Everyone remembers fourth down where Cousins missed Kyle Rudolph, but it should have never gotten there, as on third-down, Dalvin Cook had some room until he and Cousins botched the exchange.

Synopsis: On the Vikings only drive that exhibited signs of life, they had first-and-goal at the four-yard line. After two wasted plays, Cousins handed the ball to Dalvin Cook. The hand-off was far from a clean exchange, as Cook and Cousins ran into each other, allowing Seahawks defensive-end, Frank Clark, to easily stop Cook from getting into the endzone.

What I Wrote Then: The Vikings would turn the ball over on downs on the ensuing play. Their one chance to take the lead, and potentially win this game came down to this drive. The way the Vikings defense was playing and how Seattle was unable to move the ball through the air, a touchdown could have been enough. Unfortunately, this play had no chance once Cook and Cousins botched the exchange. Cousins proceeded to miss Rudolph on fourth down for a turnover on downs.

Despite the above mishap, the Vikings had one more shot, until the refs picked up the flag on Bobby Wagner’s blocked field goal. A flag would have given the Vikings a first-down at the SEA 14. Instead, the Seahawks took over. Additional Note: a win in this game would have likely given the Vikings the 5-seed.

Synopsis: The Vikings had great field position after a three-and-out by the Seahawks. Unfortunately, they had to settle for a field goal to cut the Seattle lead in half. Bobby Wagner vaulted himself over the line and blocked it. The refs through a flag on the play, but picked it up claiming the play was clean.

What I Wrote Then: The Vikings ultimately lost. Did the Vikings deserve to win this game? No. Did they Vikings play well enough to win? Half of them did. Would they have won had this been called? Probably not, but maybe. But who cares if they didn’t deserve it, a win is a win, and this call by the refs put the nail in the coffin. With all things frustrating about this game, this is an inexcusable call that very well altered the outcome of the game. A flag was thrown, which rightfully should have stayed. Not only would the Vikings have been re-kicking, but they would have had first-and-ten at the Seattle fifteen-yard line with an opportunity to take the lead. Instead, the Seahawks obtained possession and the NFL is parading Bobby Wagner around like he’s the greatest thing since sliced bread when he actually made a bone-headed play. The quote from Pete Carroll after the game that, “it was poetic after last week’s game that Bobby would get the chance to block the field goal and he pulled it off and did it. It was just an incredible play,” is like calling a basketball player who sticks his hand through the bottom of the hoop to goal-tend without it being called an incredible play.  There is no explanation that the officials picked up a flag. They threw it, because somebody saw the illegal leverage Wagner gave himself, and proceeded to pick it up anyways. It’s an inexcusable decision. I’m not mad, though.