With 1:11 left in the first half, the Vikings were inside of the Saints 20-yard line, looking to take a 10-point lead and receive the second half kickoff. Instead, Adam Thielen fumbled and the Saints capitalized, scoring a touchdown before the half to establish a 4-point lead of their own. From there, the game spiraled out of control and the Vikings never re-found their footing. These are the plays that contributed to their tumultuous loss:

Synopsis: On the Vikings second drive, Latavius Murray punched one into the end zone, giving them a 13-7 lead, PAT pending. They score remained after Dan Bailey hooked his XP left of the uprights.

Because of This Play:  This was the beginning of the Vikings shooting themselves in the foot. This play was not tied to a shift in momentum, but its affect was felt later in the game when the Saints went up 30-13. Had Bailey made his XP, it would have been 30-14 and the Vikings, down 16, could have tied the game with two touchdowns (and two 2-point conversions). It’s an unlikely probability to have made a difference, but having that point would have generated a stronger sense of urgency, instead of feeling defeat down by three scores late in the game.

Synopsis:  The Vikings had scored on 2 out of 3 offensive drives and looked like they were going to make it 3 of 4. Adam Thielen took the ball on a screen from Kirk Cousins and proceeded to fumble. The Saints took it into Vikings territory where Laquon Treadwell made the tackle but removed his helmet to tack on an additional 15 yards.

Because of This Play:  This is an obvious one, but it’s all too important. This is where the Vikings lost the game and will be a play we all look back on at the season’s end if the Vikings fail to meet expectations or make the playoffs. They were about to grab the momentum and go into the half up by either 6 or 10 points in addition to receiving the second-half kickoff. Chances were, Drew Brees wasn’t going to get the ball back until the Saints were down at least 10 points, and probably more. The Treadwell penalty turned what could have been a field goal into a probable touchdown, setting off a series of meltdowns by the team.

Synopsis:  On their first drive of the second half, the Vikings needed to re-gain the momentum lost by the Thielen fumble. Stefon Diggs took a short pass from Cousins and looked like he was going to convert on third down, setting the team up around midfield with a fresh set of downs. Instead, he lost his footing a bit and fell just short of the line to gain.

Because of This Play: The play that was critiqued (below) was the decision to go for fourth down. Lost in that decision was the fact it should have never come to it. Diggs  was running free but got tripped up short of the first down, forcing Mike Zimmer to make an awfully questionable decision.

Synopsis: After Diggs failed to convert, Mike Zimmer left the offense on the field. Kirk Cousins found Laquon Treadwell over the middle, who had the ball knocked out of his hands by Marshon Lattimore to give the Saints the ball in Viking territory.

Because of This Play:  The tone was set for the rest of the game, as Zimmer exuded a feeling of desperation. After the Thielen fumble, nobody was able to re-gain confidence, and it all started with Zimmer. Because the Vikings had, in essence, a 14-point swing at the end of the first half, Zimmer was impatient in re-gaining the lead.  The Vikings were only down by four with almost half of the game left and the defense was playing well. The failure to convert put the defense in a difficult spot and gave the Saints three points. With Zimmer on edge, everyone else followed suit with an unprecedented sense of urgency. Cousins took a weird sack on the next drive (almost fumbling it away) before throwing a pick-six to give the Saints a commanding lead.

Note: The worst part of this play may have been Cousins decision to throw the ball to Treadwell, when he had both Thielen and Aldrick Robinson open for a quick completion. 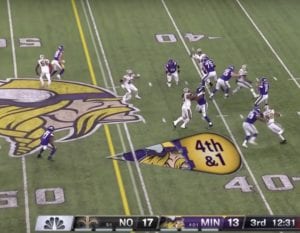 Synopsis: In full desperation mode, the Vikings had the ball at midfield, trying to cut the Saints lead in half. Cousins took a quick drop back and Sheldon Rankins fought his way through the line to take him down, ending the drive and forcing a punt.

Because of This Play:  This was the last chance the Vikings seemingly had at making this a close game. Because of all their mistakes, they found themselves down by fourteen with the ball at midfield. A score on this drive would have put pressure on the Saints to move the ball and there was still another quarter to be played. Rankins put an end to the drive with a sack, and the Saints proceeded to melt the clock down on the next drive, taking a 17-point lead in the process.