The Minnesota Vikings opened voluntary workouts at Winter Park this week, marking the beginning of “official” offseason activities. Each year, the climax of the Super Bowl seems to be followed more closely by the start of these workouts and team activities.

What we consider the “offseason” is just one part of the NFL’s shift to a year-round schedule. As soon as the winner hoists the Lombardi trophy, analysts turn to the college tapes in anticipation of the NFL Draft. The start of free agency may come before the rush of collegiate speculation, but this is the time of the year to fawn over favorite players and potential picks.

A name oft-floated around the Vikings is Joe Mixon — the troubled, yet über-talented running back out of Oklahoma. For some, he’s a surefire selection if available when the Vikings pick at No. 48. But for others, he’s an untouchable prospect with too many disqualifying questions to land in Minnesota.

Joe Johnson of Purple PTSD recently asked me to investigate Mixon; what I thought of him as a player, whether I think he’s a good fit for the offense, and whether or not the team’s interest in the former Sooner is more than “smoke.” After the jump, I’ll break it down, one question at a time.

What do you think of Joe Mixon, the player?

Drew Mahowald already broke down Mixon’s game, but it’s clear to anyone watching — the guy can play. He called Mixon “the best running back in the class,” and most professional analysts would tell you the same thing. Dane Brugler, my favorite of the bunch, had this to say about Mixon:

[quote_center]”Mixon was reportedly given a first-round grade from the NFL Advisory Committee but this is based entirely on his play with no consideration given to his criminal history. Mixon will almost surely be selected much lower and perhaps even slip out of the draft entirely. Adding him to the roster would be a public relations nightmare but so too is trying to stop this dynamic athlete in the open field.”[/quote_center]

I think that sums up the whole situation perfectly, but we’ll address the off-field concerns later in the post. Right now, we’re talking buzz words like “first round talent” and “dynamic athlete.” On the field, Mixon is just that; a true heir to his Oklahoma contemporary, Adrian Peterson. He’s who some call the next Le’Veon Bell, a player I’ve always wanted in Minnesota purple and gold. Landing Mixon, the football player, would be a dream come true for the Vikings.

Brugler actually mocked Mixon to Minnesota in his latest prediction, citing the fact that Rick Spielman and Mike Zimmer were the only general manager-head coach combo at Oklahoma’s recent pro day. He called Mixon a top-15 talent, and from a pure football standpoint, there’s no better back available in this year’s crop of premier talent.

Still, Mixon’s game isn’t without its flaws. Lance Zierlein warns that playing in the Big 12 hurt Mixon’s rushing style; the conference’s weaker defenses allowed Mixon to rely more on superior ability than vision or feel for the game. Such habits could result in struggles for Mixon at the pro level, especially behind weaker offensive lines like those in Minnesota. Despite these issues—all correctable in the NFL—Mixon would walk into Winter Park as the most talented running back on the roster.

Does he fit in Minnesota’s offense?

It’s simple: Joe Mixon is a fit in any professional offense. Before his 21st birthday, Mixon will have already rushed for 2,000 yards and scored 15 touchdowns on the ground. He’s also caught 65 passes for 894 yards over his two-year Oklahoma career, adding another 22 kick returns and a touchdown to his impressive resumé.

In Minnesota, Mixon has the potential to wear a number of different hats. He’s Jerick McKinnon, but with elite size and Power-5 pedigree. He doesn’t just catch the football; he’s a “devastating” pass-catching option. He’s an excellent route runner, a willing pass protector, and has the ability to turn straight-line opportunities into big-time scores. With his skill set, Mixon is a kick returner, a running back, and a spot slot receiver on a unit desperately in need of explosive playmakers.

Here’s where things get fun. Mixon is the draft’s most talented running back, but he’s also the class’s biggest question mark. He’s reportedly met with 15 teams, though all 32 are likely interested in the Sooners’ immense talents. If you ran one of the league’s franchises, wouldn’t you at least consider adding Mixon to your roster, even with his off-field baggage?

More importantly, are any of the 15 reported teams truly interested in drafting Mixon? My gut says, “Yes, most definitely.” And of those teams, Minnesota’s pursuit has been the most transparent.

Mike Zimmer’s appreciation for the player is obvious, and all reports indicate every meeting with Mixon has gone well. Landing Mixon at pick No. 48 would make complete football sense for the Vikings, but from a public relations lens, the move would only damage the franchise’s reputation.

This is a team fresh off the Adrian Peterson era with an opportunity to move past the drama created by their once-great running back. The nightmare he orchestrated two years ago—his child abuse charges, Twitter meltdown, and unceremonious return—skewed public perception and hurt his stock with the Vikings’ fanbase.

Despite the drama, Zimmer and Spielman made every effort to mend wounds with Peterson, traveling to his Houston home and convincing the face of the franchise to return before the 2015 season. They’ve shown a commitment to uniquely talented football players with checkered pasts, but that’s not necessarily an indicator of their potential selection of Mixon.

Sure, there are parallels: Both went to Oklahoma, both are top running back prospects, and both carry off-field baggage. It wouldn’t shock me if the Vikings were legitimately interested in Mixon, but I have doubts around their realistic, draft day commitment to using a second-round pick on him.

Mixon has Peterson-like potential, but there’s no way Minnesota makes the mistake of drafting yet another running back with probable public relations consequences. There will be plenty of backs available late in this year’s draft, and though they don’t possess Mixon’s rare talents, have the skills to make viable contributions to Minnesota’s offense. 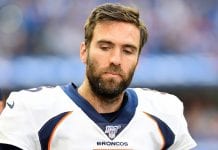