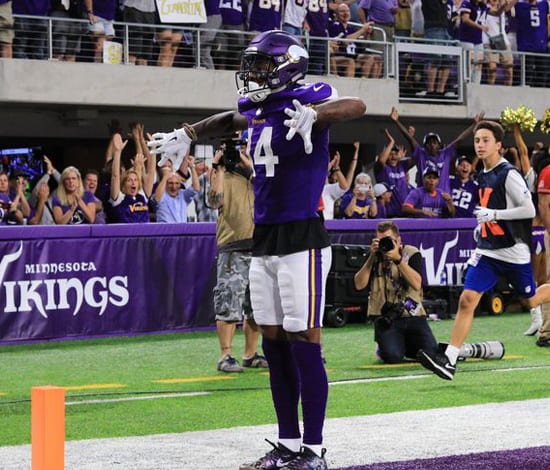 The Vikings’ 29-19 victory over the New Orleans Saints on Monday Night Football wasn’t as close as the score suggests. Sam Bradford was electric against the ailing Saints’ defense, throwing for 3 touchdowns, an eye-popping 10.8 YPA and a career high 148.7 passer rating. The Vikings defense threw cold water on Adrian Peterson’s grudge match, with his attempt to “stick it” to the Vikings producing just 18 yards on 6 attempts. The Vikings took a win by force Monday night. Here are a few key stats that can tell us exactly how that transpired.

Throughout the week leading up to this game, I predicted that 1st down success rate would decide the game. The Vikings had a long 2016 season of falling “behind the chains”, or into difficult down and distance situations. A poor effort on first down would mean 2nd and 10 or 3rd and 9, which the Vikings have struggled with relative to the league. I had it backwards. The Vikings struggled a decent bit on 1st down, only achieving success on 56% of plays. Part of this was a number of mistakes in run blocking from Nick Easton and Riley Reiff, though a solid performance by Dalvin Cook mitigated some of the damage. This put the Vikings in a number of 3rd and long situations, averaging 3rd and 7 or 3rd and 8. But Bradford’s hot night coupled with Pat Shurmur’s excellent manipulation of receiver matchups made the Vikings 9 of 14 on said 3rd downs. Time and time again, Sam Bradford converted from behind the eight ball, which is something he was often (rightly) criticized for being unable to do.

Average Depth of Target, or the average distance a throw travels whether or not it’s caught, can measure a quarterback and offense’s aggressiveness over a given period. Last season, Bradford and Shurmur were at the bottom of the league, feeding into their conservative stereotype. Monday night, we saw almost a full yard of improvement in that area, and that aggressive strategy paid off in a big way. The ability to do this is thanks in no small part to stellar protection from the offensive line, with no single blocker giving up more than one pressure, for a total of just six. Riley Reiff and Nick Easton shined in particular, making up for a few mistakes in the run game by pitching shutouts in the pass.

The Saints defense is notorious for being easy to move the ball on, which is a good reason to hold back on your Super Bowl predictions. Kenny Vaccaro in particular enabled a lot of the Vikings’ gaudy production. In addition to allowing two touchdowns on slow coverage reads, Vaccaro’s 1.57 Yards/Cover Snap (per PFF) was one of the league’s worst. To put that in perspective, that’s one player accounting for almost half of the target 1st down yardage. Playing against Kenny Vaccaro is like starting every series at 1st and 5. Vaccaro was slow to read simple passing concepts and allowed both Diggs and Rudolph to get outside him in key moments, as well as being late to help mismatched linebackers when they lined up against Adam Thielen. This kind of performance allowed the Vikings to flex their muscles in prime time, but other teams won’t allow their safeties to fall apart like this.