Vikings Compensatory Update Suggests a 5th-Round Pick May be Coming

For some, there is concern about the Vikings’ lack of draft ammunition. Going into the event with plenty of picks is obviously the goal, but Kwesi Adofo-Mensah’s trading ways has left Minnesota with a mere 4 picks. Thankfully, it looks like the Vikings compensatory finagling may add another pick to the purple total.

On Over the Cap, there is a piece projecting how compensatory picks will get divvied up going into the 2023 NFL Draft. The best guess (things haven’t been 100% finalized) is that Minnesota will be adding a 5th-round selection to their total.

Last offseason, Tyler Conklin signed a relatively sizable deal to head to the New York Jets. The total money surpassed $20 million over 3 seasons, a nice pay raise for the 2018 5th-round pick. In his first season with Robert Saleh (and no little QB uncertainty), Conklin did some good things. He helped the Jets to a 7-10 record while piling up 58 catches, 552 yards, and 3 TDs.

The 2022 production is nearly identical to Conklin’s final season in Minnesota where he had 61 catches, 593 yards, and 3 TDs. He even had identical targets in both seasons (87). In other words, Conklin likely gave the Jets what they were hoping for.

At present, the Conklin loss gives the Vikings a shot at bringing in a 5th-round selection.

Now, the article goes on to discuss all kinds of eventualities and possibilities. For most NFL fans, the process for allocating compensatory selections is an enigma. For our purposes, it doesn’t make too much sense to get tangled in the finer details of the NFL’s compensatory machinations. Rather, simply note that the team is looking at some added draft help.

Kwesi Adofo-Mensah and the Upcoming Draft

For a little while, PurplePTSD‘s Josh Frey has been churning out draft content. Those who are looking for a better understanding of this year’s prospects should give his articles a shot.

As far as I can tell, Vikings fans would be thrilled to see some reinforcements for the defense. Now, we should keep in mind that 5 of the initial 6 picks from the most recent draft were for defenders, so merely bringing in young defensive talent isn’t the same thing as bringing in players who will make the Minnesota defense among the game’s best.

Even still, the desire for youthful defenders remains.

Perhaps the two most significant additions could come at edge rusher and corner. Put simply, these are the two most important defensive positions given the modern emphasis on passing the ball. Nevertheless, one wonders about someone like Trenton Simpson to give the linebackers a fresh infusion of speed.

One final thought: the Vikings have a lot of internal free agents. The finances dictate that retaining all of them is unlikely to materialize. As a result, Adofo-Mensah has the capacity to add more picks to his total for the 2024 draft. Shrewd GMs are constantly looking for any advantage they can get. Effectively working the compensatory formula is simply one way to give one’s team an edge. 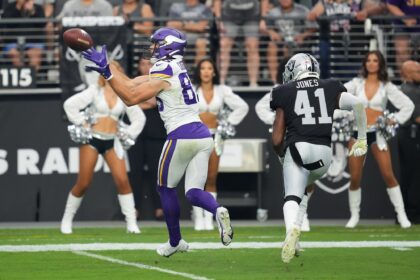