When the regular season ended, it appeared that Dalvin Cook was going to miss out on an NFL Pro Bowl selection for the first time since 2018. Representing the NFC was supposed to be Saquon Barkley, Tony Pollard, and Miles Sanders. However, the injury to Pollard during the Dallas Cowboys Divisional round loss to the San Francisco 49ers leaves a vacant spot.

In his place, Cook is headed to the Pro Bowl for the 4th season in a row. The Vikings 27-year-old running back didn’t have one of his most efficient seasons in 2022, but he did surpass 1000 yards rushing once again. Cook finished the season with 264 rushes for 1173 yards and 8 TDs. He also caught 39 passes for an additional 295 yards and 2 TDs.

With Kevin O’Connell coming in as the new head coach of the Vikings, it was expected that he would revamp the Minnesota offense to turn them into a pass-first group. That certainly came to fruition, with Minnesota ranking among the bottom ten of the NFL in both rushing attempts and rushing yards.

Even still, the fact that Cook ranked sixth among all running backs in rushing yards is an impressive feat and worthy of a Pro Bowl appearance. Joining him on the NFC Pro Bowl roster for the Vikings are five other players. Those other Viking Pro Bowlers are QB Kirk Cousins, WR Justin Jefferson, TE T.J. Hockenson, OLB Za’Darius Smith, and LS Andrew DePaola.

Even with this award, the 2023 offseason figures to be a tumultuous and uncertain one for Cook and the rest of the Vikings running back room. Alexander Mattison is heading into free agency, and if his mindset is the same as it was prior to the 2022 season, he will be on the search for a starting job elsewhere.

In addition, Cook is entering his age-28 season in 2023, an age that is not the most promising for NFL running backs. The Vikings can save nearly $8 million against the salary cap by cutting the veteran running back, so it will be interesting to see how things play out over the next couple months.

For now, though, Cook is joining multiple of his Vikings teammates on to Pro Bowl roster. That game is scheduled to take place on Sunday, February 5th in Las Vegas. 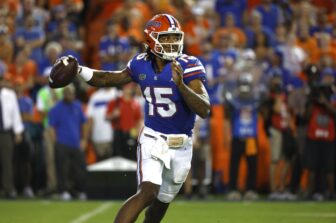