One of the interesting tidbits to emerge from Kwesi Adofo-Mensah’s and Kevin O’Connell’s press conference was that the full expectation is that Kirk Cousins will be the team’s QB1 in 2023.

Given the nature of Cousins’ contract, the GM’s proclamation isn’t particularly surprising. Mr. Cousins will carry a $36.25 million cap hit into the year. Cutting him – not an option they’re seriously considering – would leave behind a $48.75 million dead money hit.

For whatever it’s worth, a trade would free up $17.5 million while leaving $18.75 million behind, though the chances of a trade materializing are very small.

Much likelier is an extension. In fact, I’m of the opinion that we’ll see Kirk Cousins sign a deal that not only keeps him in town from 2023 to 2024 but also for 2025. Such an approach would give management more wiggle room to navigate the current offseason. Don’t forget: the team currently has negative money as they venture into the offseason, so some added room would be a positive.

Obviously, one of the first questions we need to ask is what an extension can look like. For starters, it needs to carve out extra space in the upcoming season. Per Over the Cap, a Cousins extension has the potential to free up more than $23 million in space. It’s easily the most cap room a single player on Minnesota’s roster can provide. In fact, it more than doubles the next closest players in terms of potential savings in 2023.

Don’t expect the team to push things to the max, but an extension is an intriguing possibility because of the capacity to create more room for the current offseason.

An extension would allow Cousins to take up a smaller percentage of the 2023 budget. Take a look at how that has broken down since hopping over to the purple and gold:

Put simply, it’s going to be difficult for the Vikings to compete if Cousins makes 15% or more of the salary cap. It’s a humongous amount for an individual QB to demand. During the offseason, I did a study on QB cap hits and Super Bowl champions. A single QB demanding 15% or more of the cap makes it very, very difficult to win the Lombardi. Unless I was mistaken in that study, it has never happened before in league history.

Making an extension even more appealing – that is, even beyond just getting things to a more manageable percentage of the cap – is that Cousins is coming off an impressive season. The final play featured a horrendous decision, one that gave the team very little chance of success. That being said, we shouldn’t be too quick to forget the 8 game-winning drives, and nor should we overlook his incredible durability.

A QB who is super smart, has sneaky athleticism, great accuracy, and an ever-expanding clutch factor isn’t one to get rid of. Though entering the 2023 season as a 35-year-old, Cousins hasn’t lost zip on his passes. The man can still spin it.

There is going to be a lot of money shuffling in the coming weeks and months as the Vikings look to get in a better financial position. Forced to guess, I’d say a two-year Cousins extension is part of that effort to get Minnesota into a position to reload for contention in the upcoming season. 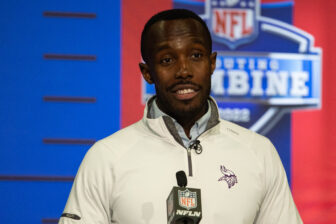