The Misconception About Kwesi Adofo-Mensah & His “Competitive Rebuild” Philosophy

Much has been made of the “competitive rebuild” philosophy of Vikings GM Kwesi Adofo-Mensah.

After getting hired, the young executive quickly began working on dismantling false dichotomies. Quite often, Vikings fans (and writers) participated in either/or thinking regarding the future of the Vikings. Some believed that a full scale rebuild was prudent; others thought that fully gearing up for 2022 contention was the right approach.

Adofo-Mensah didn’t succumb to either extreme, instead opting for his now-infamous “competitive rebuild,” an approach that allows for immediate competitiveness without totally undermining the future.

Kwesi Adofo-Mensah and the Roster Construction

Following the decision to fire Rick Spielman and Mike Zimmer, co-owner Mark Wilf addressed the fanbase from the Vikings’ facility. In that video, Wilf suggested that the ownership wasn’t interested in a rebuild. Instead, they believed that the Vikings had enough talent to compete in the 2022 season.

The new general manager – whoever that was going to be – needed to be on board with the desired approach.

As a result, it shouldn’t come as much of a surprise that Kwesi Adofo-Mensah began preaching about the merits of finding a middle way. Neither a full rebuild nor full a pedal-to-the-metal approach would do. Adofo-Mensah tried to thread the needle, allowing his squad to succeed in 2022 and in the future.

In many ways, he has been successful. Finishing 13-4 and reclaiming the North were tremendous accomplishments. The playoffs, to be sure, were a letdown, thoroughly mixing optimism with pessimism that has sometimes come to characterize the perspective of those following this eternally-cursed-yet-somehow-loyalty-inducing squad. Getting bounced by the Daniel Jones-led Giants will do that.

Critically, Adofo-Mensah has left himself with a fair amount of flexibility moving forward. True, the 2023 budget looks very snug and painful decisions will need to be made to contend in the upcoming season. Nevertheless, it’s worth noting that the team has a ton of financial flexibility in the 2024 and 2025 seasons. At present, Minnesota has nearly $100 million to play with in 2024 and a staggering $204 million in 2025.

Obviously those numbers are going to change in the coming months and years, but it’s good to remember that climbing to 13 wins in 2022 didn’t come at the expense of the budgets in the coming seasons.

If the team totally falls flat in the upcoming season, perhaps Adofo-Mensah will have the support of the ownership to shepherd this team through a complete teardown and rebuild à la Ryan Poles in Chicago. If the team does marvellously, then we may even see the GM head to the other extreme: an LA Rams style abandonment of the future in favor of getting that elusive Lombardi.

The team results – alongside the desire of the ownership – will likely go a long way in influencing how Adofo-Mensah decides to proceed.

As we mentioned, the team is going to have some work to do in order to get the finances in order for 2023. One has to think that Adofo-Mensah (and Kevin O’Connell) will be looking to give it another honest shot in the upcoming season. Though the underlying numbers were often underwhelming, the team’s record wasn’t.

Minnesota, in short, will likely allow their 13 wins and NFC North title to override any lingering temptation to embrace a rebuild. Instead, look for Adofo-Mensah to keep espousing the merits of a competitive rebuild.

My belief is that we’ll see a Kirk Cousins extension. We’ll almost certainly see a new deal for T.J. Hockenson, and it remains to be seen what will get put in place for Justin Jefferson. Some cuts will inevitably happen and there might even be a trade or two.

The main goal will involve giving themselves a chance in 2023 without undermining the team’s long-term health.

Editor’s Note: Information from Over the Cap helped with this piece. 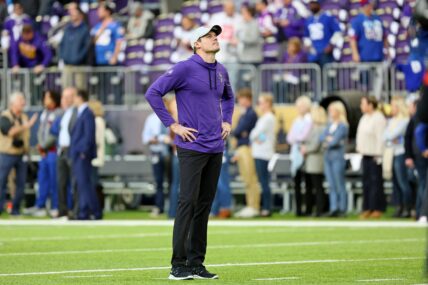 Also Read:
3 Glaring Problems the Vikings Must Fix in 2023
Share: