The Vikings actual football season may be over, but the season of mock drafts is just beginning. Here on PurplePTSD, we will be doing weekly editions of Vikings mock draft Monday to prepare for the 2023 NFL Draft on top of the Vikings Draft Thermometer series daily every Tuesday-Friday leading up to the draft. For this mock draft series, we will be using the simulator on NFLMockDraftDatabase.com. So, kick back, relax, and let’s talk about these potential future Vikings.

In the upcoming 2023 NFL Draft, Jalin Hyatt is one of the most explosive receivers of the entire class. For a Vikings offense in need of a deep threat opposite of Justin Jefferson, this could make him a very attractive target for the Vikings early in the draft, especially if defenders like Trenton Simpson fly off the board early on.

In 2022 with Tennessee, Hyatt burst onto the scene in the SEC with 67 receptions for 1267 yards and 15 TDs, leading the SEC in both receiving yards and TDs. This selection would create a quartet of targets at age 26 or younger with T.J. Hockenson, Hyatt, Justin Jefferson, and K.J. Osborn.

Eli Ricks is a former 5-star recruit, and after spending his first two collegiate seasons at LSU, he transferred to Alabama for 2022. While it certainly wasn’t the breakout season that he hoped would catapult him into first round consideration, Ricks remains a strong CB prospect that has starting potential.

Ricks is a physical CB that thrives in press coverage. If the Vikings don’t bring back Patrick Peterson and Duke Shelley, there’s a very good chance that they opt to take a CB early on in this draft. Someone that can bring some fire and physicality to the defense would be ideal.

Illinois has had a knack for producing NFL quality defensive backs over the past couple years, and they have a couple more in the 2023 Draft class. Sydney Brown is a sturdy athlete with terrific speed in the secondary.

This past season at Illinois, Brown showcased outstanding ball skills as well, leading the Big Ten with an incredible 6 interceptions over 12 games. There’s a non-zero chance that the Vikings are looking at replacing both Cam Bynum and Harrison Smith in the starting lineup, and if that scenario plays out, Brown is terrific value in the fourth round.

Another area that the Vikings could see a need is the interior defensive line. Dalvin Tomlinson is set to enter free agency this offseason, and while Byron Young may need some time to develop into a starting role, he has the size and strength to compete at the NFL level.

Young could potentially be used on the edge as well, but he projects much more like an interior defensive lineman. Depending on what happens with Za’Darius Smith this offseason, the Vikings could value an interior defender much more than an EDGE rusher.

Jim Leonhard is one of the candidates to take over the Vikings defensive coordinator job for 2023, and if that happens, he could have a role in this selection. Nick Herbig is smaller than a prototypical pass rusher, but he has extreme speed and athleticism at the outside linebacker spot for the Badgers. 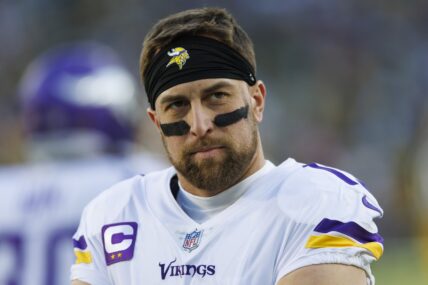