Welcome to the Vikings Draft Thermometer series, PurplePTSD‘s one-stop shop for all your 2023 NFL Draft needs. Throughout this series, we will be examining a number of prospects ahead of the 2023 NFL Draft, analyzing their strengths, weaknesses, what exactly their role could be at the NFL level, and most importantly, whether or not they could end up playing their first NFL snaps in a Vikings uniform. With that, let’s take a look at today’s prospect: Clemson LB Trenton Simpson.

In terms of linebacker play, it’s hard to find a prospect with better tape than Trenton Simpson. During his time at Clemson, he was used all over the field in Brent Venables’ defense. There were plays where he lined up as a de facto EDGE, a MIKE linebacker, and especially during 2021, he even stepped back to play slot CB.

Simpson can line up anywhere due to his freakish combination of speed and strength. When the combine rolls around, expect him to run somewhere in the low 4.5s, and he could even dip into the 4.4s, which is just incredible speed for someone his size. For reference, Brian Asamoah ran a 4.56 at last year’s combine.

He isn’t just a “jack of all trades”, either. Wherever Clemson needed Simpson to play, he excelled. As a blitzer and run stopper, he had a knack for finding his way into the backfield and impacting plays. In coverage, per PFF, he was targeted 26 times and gave up just 16 receptions for 123 yards. There’s a reason that, despite being an off-ball linebacker, there have been rumblings of him going in the top half of the first round.

For all the good, Simpson still has a few things to work on. Most notably, he needs to become more consistent at wrapping up his tackles. There were a few instances where he had QBs dead to rights in the backfield, and instead of wrapping up, he lays a body hit on them, allowing them to escape. He probably could have added a few more sacks to his total this season if he wrapped up more tackles.

There are also a few instances where Simpson overcommits to the run, leaving him susceptible to play-action. Luckily, his speed allowed him to recover much better than others would be able to, but he could improve a few of his instinctual reads as he won’t be able to rely solely on athletic ability at the NFL level.

Trenton Simpson is a tricky prospect to project because of his position. Like RB Bijan Robinson, he may be a top-10 talent in this class, but he plays a devalued position. However, there’s a chance that someone in the first half of draft throws away position value and selects him due to his freakish athletic skillset and ability to impact games in so many ways.

However, if he is to fall into the 20s, the Vikings should pounce on him. They have a clear need for faster players at their linebacker position, and a duo of Asamoah and Simpson moving into the future could be dynamic. 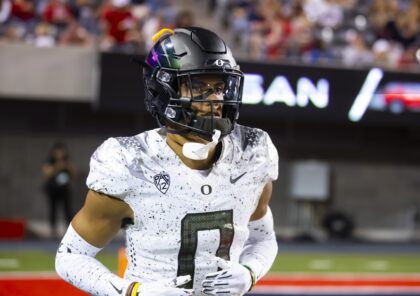