The college football regular season has come to an end, and that means we are growing ever closer to NFL Draft season once again. Earlier in the week we discussed some of the best QB prospects that could be in the 2023 NFL Draft, and today, we discuss some of the top running back prospects.

Simply put, Bijan Robinson is the most NFL ready running back since Jonathan Taylor. Given the decreasing value put on the position by NFL teams over recent years, we may not see Robinson go in the top 10 picks, but he is undoubtedly a first-round pick when April rolls around.

The Texas RB is a weapon regardless of where he lines up on the field. He can be a typical runner between the tackles, but the Longhorns have also used him in a receiving role where he’s found success as well. As a 6-foot, 215-pound RB his agility and size will translate to the NFL level very well.

After a couple of seasons at Georgia Tech, RB Jahmyr Gibbs transferred to Alabama in order to prove himself against the best defenses in college football. The junior has done just that, rushing for 850 yards and 7 TDs in 11 games for the Crimson Tide.

Gibbs also brings a tantalizing combination of skills as both a runner and receiver. He’s explosive and finds ways to maneuver around defenders with ease. In a normal year, he’d be a very strong choice for RB1, but his smaller frame and lack of pass blocking ability puts him below Robinson.

Mo Ibrahim has been a dominant runner in the Big 10 ever since he got to Minnesota. He’s rushed for over 4500 yards over his five seasons with the Gophers despite missing almost all of the 2021 season due to injury.

The biggest question mark surrounding Ibrahim was whether he’d be able to bounce back to his old self from his torn Achilles. He did that and more this season, and through 11 games, he’s put together career highs in carries (304), rushing yards (1597), and rushing touchdowns (19).

Ibrahim is much more of your prototypical back power running back. He has a sturdy frame and the ability to bounce off tacklers to create yards after contact. The one knock on him, similar to Jonathan Taylor when he was entering the NFL Draft, is the fact that he has shown virtually nothing as a receiver. Throughout his collegiate career, Ibrahim has recorded just 22 receptions.

The Michigan Wolverine may be one of the shorter running backs in the country at 5’8, but he packs a punch in Michigan’s offense. Blake Corum has been one of the biggest reasons why Michigan is on track to get into the College Football Playoff once again.

Corum is a very instinctive runner and is capable of making quick decisions when he sees an opening. The thing that pops out most about Corum is his agility and ability to move laterally as he weaves through defenses. Then, once he decides on a hole, he bursts through with incredible speed.

However, his small stature gets the better of him when it comes to blocking as well as breaking through tackles. This could force him to fall into the middle rounds of the draft, but he certainly has the skills to be an NFL back.

Zach Charbonnet might be the most physically overpowering rusher in the 2023 Draft class. At 6’1 and 220 pounds, the UCLA power back has been running through PAC-12 defenses all season long to the tune of 1359 yards and 14 touchdowns at 7.0 yards per carry.

The numbers are gaudy, and the physique is exactly what you want from an NFL running back. However, Charbonnet needs to get better at evading defenders rather than trying to run through them.

Derrick Henry has gotten away with plowing through defenses throughout his NFL career, but he has 30 pounds on the UCLA product. Charbonnet quickly loses momentum when he’s met by defenses at the line of scrimmage, and it could be a problem at the NFL level.

Regardless, he should be reliable ball carrier at the next level. Seeing as the Vikings will likely lose Alexander Mattison this offseason, this could be a player to keep an eye on as his replacement. 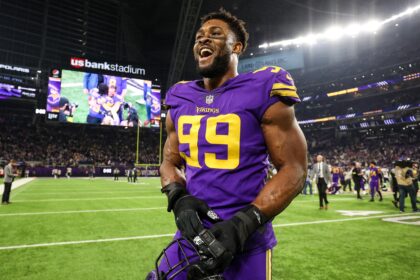