Originally a Ravens 4th-round selection, Za’Darius Smith was someone Vikings fans dreaded because of his proclivity for sacking the quarterback. He was a Packer from 2019-2021. During that stretch, Smith had some great performances against Minnesota.

After being cut by Green Bay, Smith became available. Kwesi Adofo-Mensah did a marvellous job of putting together a contract that works for both player and team. Smith’s cap hit comes in a bit below $3.2 million, a tiny number considering how excellent he has been.

Take a look at his statistics from his games in October:

As you can see, Smith has had a great month. His past two games have been particularly productive. He has 5 sacks and 6 TFLs over these past two games.

Moving forward, Ed Donatell’s defense is going to need Za’Darius Smith to continue his dominance. When he’s on, the defense is considerably more difficult to overcome. Donatell’s willingness to move Smith around helps the veteran pass rusher to get favorable matchups, increasing the chances of getting the sack.

One wonders if a similar strategy can/will be used for Danielle Hunter, who is also a star edge rusher. Hunter is making the transition to 3-4 OLB, so it makes sense that his start to the season has been a touch more modest than Smith’s. Getting both players playing at an elite level would further stress the opposing team’s pass protection.

Smith has the chance to help push his team to 7-1 when Minnesota travels to Washington this Sunday. The game is scheduled to begin at 12 CT. 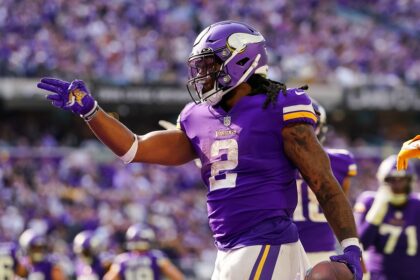