There has been quite a bit happening among the Vikings’ TE group. Not too long ago, fans were looking at a depth chart that consisted of Irv Smith Jr., Johnny Mundt, and Ben Ellefson. Ellefson ended up getting hurt and then Smith did, as well. Kwesi Adofo-Mensah traded for T.J. Hockenson and then Ellefson became eligible to return from the IR.

Following all of that? Is so, let’s move onto the next bit of news. Tight end Jacob Hollister is no longer on Minnesota’s practice squad. The Raiders decided to sign the veteran following the news that Darren Waller would need to miss a good chunk of time:

The main Vikings TE is Hockenson, a reality that won’t change anytime soon. The former Lion did excellently in his first opportunity in purple. Otherwise, Mundt has been a solid TE2 and the hope is that Ellefson can add some muscle as a blocker.

Plus, as Will Ragatz notes, the team still has Muse on their practice squad. The rookie TE was chosen by the Vikings in the most recent draft. He’ll be the team’s fourth option moving forward. Or, perhaps, he could even be the TE3 if Ellefson needs a bit of time to get back into shape.

Hollister has been in the NFL since 2017. Since then, he has been with New England, Seattle, Jacksonville, and Minnesota. He now gets a chance with Vegas. It’s possible that a strong effort for the rest of the 2022 season will allow Hollister to stick around beyond the end of the year.

Minnesota’s next game will take place this Sunday when they travel to Buffalo to take on the Bills. Buffalo’s defense is tremendous, arguably the best in the NFL. As a result, it’ll likely take a full-team effort to move the ball with any regularity.

Justin Jefferson has a gravitational pull on the opposition’s secondary. He’ll once again receive a ton of attention whenever he is trying to make a play. If a Vikings TE can help the WR1 by making plays, then Kevin O’Connell and the offense may be able to pick up enough first downs to put points on the board. 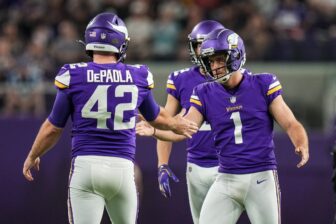