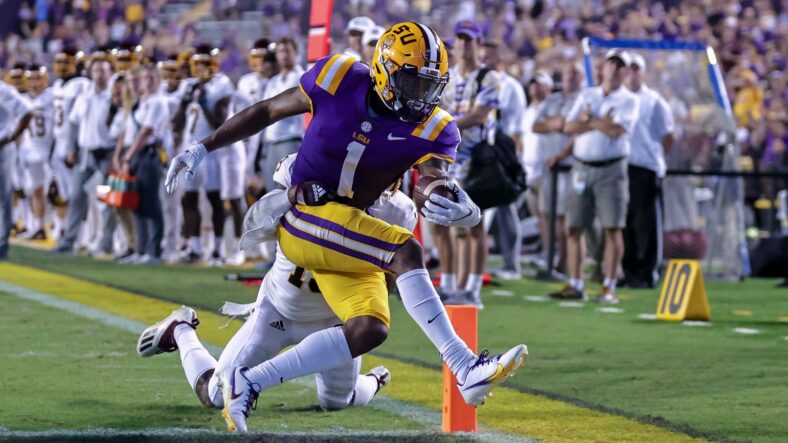 The LSU Tigers have been known for producing NFL stars over the years, and oftentimes, the Minnesota Vikings are the beneficiary of this program’s best players. Currently, the Vikings roster has four former LSU Tigers on it–Danielle Hunter, Ed Ingram, Justin Jefferson, and Patrick Peterson.

In particular, the Tigers have been known for producing some of the top receivers in the NFL over recent years, with Jefferson and Ja’Marr Chase emerging over the past two seasons. Now, the Tigers have another wide receiver who has been projected to be one of the best in the 2023 NFL Draft, Kayshon Boutte, but already, we are seeing drama start to form around the LSU star receiver.

The Tigers played their season opener against the Florida State Seminoles this past Sunday, and they lost in heartbreaking fashion, 24-23, after an extra-point attempt after a last-second touchdown was blocked. In that game Boutte struggled mightily, being targeted just five times and catching only two of them for 20 yards. One of these targets included a wide-open drop in the fourth quarter.

Additionally, Boutte’s routes seemed uncharacteristically slow compared to last year, and it just felt like he was unengaged for much of the night. Following the loss, he deleted everything LSU related from his Instagram account.

This ongoing story relates to the Vikings because there have been early mock drafts connecting the wide receiver to the Vikings next spring. This connection makes sense for multiple reasons. Not only is the LSU program a pipeline to Minnesota in a lot of ways, but the Vikings may try to add another receiver to take the WR2 role for Adam Thielen.

Thielen is entering his age-32 season and has slowly seen his production, at least in the open field, decrease over the past couple years. Perhaps the Vikings front office reads the tea leaves and tries to find another option this upcoming spring, and Boutte looked like a potential option.

The season certainly isn’t over for Boutte, and he has multiple months to turn things around. That said, the situation in Baton Rouge is one to monitor if you’re rooting for another Tiger to join the Vikings next spring.