The NFC North Round-Up: Injury Updates Across the Division

As we approach the Week 13 slate of the NFL season, there is a lot of injury news swirling around the NFC North. Today, we unpack all of the injury updates for each of the four teams.

On top of Justin Fields going through a shoulder injury that kept him out last weekend against the New York Jets, the Chicago Bears are going through multiple other injury problems as well. Safety Eddie Jackson and wide receivers Darnell Mooney both headed to IR this week, ending their season.

Jackson is the one player remaining from a once-vaunted Chicago Bears defense, but his season ends due to a foot injury suffered against the Jets. Meanwhile, Mooney has been one of the few consistent pass catchers for Chicago’s offense, but after an ankle injury knocked him out of Sunday’s game, his season comes to an end as well.

The Bears currently sit at 3-9 and can be eliminated from playoff contention this week with a loss to the Green Bay Packers.

Jameson Williams Has a Message

The Detroit Lions traded up in the first round of the 2022 NFL Draft with the Minnesota Vikings for one reason: land a star wide receiver. They hoped that star would be Jameson Williams, and they ended up selecting him despite the torn ACL suffered in the College Football National Championship Game in January.

Williams is yet to appear in an NFL game, but he appears close to making his debut. He returned to practice last week, and yesterday, he posted this tweet:

The rookie wide receiver was widely considered to be one of the best in the 2022 Draft class, so if he doesn’t make his debut this week, perhaps it will come against the team who allowed the Lions to trade up for him: the Minnesota Vikings. The two teams meet as part of the Week 14 slate.

It’s been a tough year for Aaron Rodgers and the Green Bay Packers, and it got a little tougher on Sunday night against the Philadelphia Eagles. Rodgers has been playing through a broken thumb, and then during that game, he suffered a rib injury.

However, the Packers QB stated on Tuesday that he expects to play this weekend against the Bears after getting some positive news from his scans and tests. This game is the first in Soldier Field for Rodgers since he declared himself the owner of the Bears.

Mixed Bag for the Vikings

The Vikings go into Week 13 with some positive injury news, but also some negative. For the positives, it appears that Cam Dantzler and Akayleb Evans are on the verge of returning the Vikings secondary, which has gone through the ringer over the past few weeks.

However, rookie CB Andrew Booth has been confirmed to be out for the season after undergoing meniscus surgery. The Vikings selected him in the second round of the 2022 NFL Draft with the 42nd overall pick. Injuries were a concern during the draft process, and they seem to be getting the better of the young CB early in his career.

The top two picks from the 2022 Draft for the Vikings are now out for the year after this injury. Rookie safety Lewis Cine, who was picked 32nd overall, went down in Week 4 against the New Orleans Saints. In that game, he suffered a compound fracture in his leg, ending his rookie year. Hopefully, we see a swift recovery from the rookies, and they bounce back for the 2023 season. 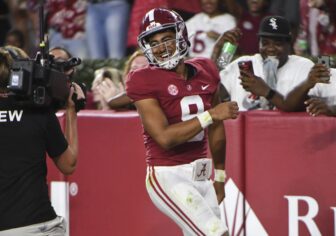