During Week 3, Tua Tagovailoa went down with an injury that, to many people, looked very much like a concussion. He hit his head on the turf, got up, stumbled around for a bit, and slowly made his way to the bench. Then, somehow someway, he came back into the game and started on Thursday night’s Week 4 matchup against the Bengals.

After that, we know what happened, and moving forward, it looks like Teddy Bridgewater is the starting QB for at least this week against the New York Jets. Then, in Week 6, the Minnesota Vikings head down to Miami for a Week 6 matchup with these Dolphins. If Tagovailoa is not cleared to play by then, we shall be in for a Bridgewater vs. Vikings showdown for the second time since the QB entered the league.

The first occurrence took place during the 2020 season when Bridgewater was the QB for the Carolina Panthers. In a wild Week 12 matchup at U.S. Bank Stadium, Bridgewater passed for 267 yards, a touchdown, and an interception, but the Vikings won the game, 28-27 because of last-minute touchdown connection between Kirk Cousins and Chad Beebe. Bridgewater led the Panthers back down the field for a potentially game-winning field goal, but Joey Slye missed the 54-yard attempt.

It must also be noted that Bridgewater was a member of the New Orleans Saints in 2018 when the Saints and Vikings met at U.S. Bank Stadium in a 30-20 Saints victory. Bridgewater played a single snap, but he did not get the start.

Bridgewater’s story in the NFL obviously got started in Minnesota as the Vikings selected him out of Louisville with the 32nd overall pick in the first round of the 2014 Draft. Over his first two seasons started 28 games, and the Vikings went 17-11 and made the playoffs in 2015 while making the only Pro Bowl of his career.

In the opening game of the 2016 season, Bridgewater suffered a serious knee injury that ended his season and Vikings career. Since then, he has had stints with the Saints, Panthers, Broncos, and now the Miami Dolphins. So far this season, he has 14 of 25 passes for 193 yards, a touchdown, and an interception.

The Vikings and Dolphins are scheduled to kick off on October 16th at 12 PM CST on FOX. 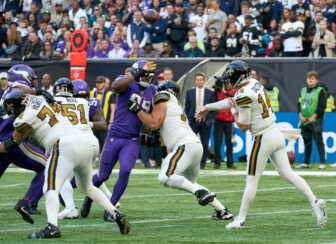 Also Read:
The State of the Vikings: Week 5