Justin Jefferson Can Make History in Week 11 Against Dallas

Ever since the Minnesota Vikings selected Justin Jefferson with the 22nd overall pick in the 2020 NFL Draft, that selection has been a home run. Jefferson has set Vikings and NFL records throughout the first 2.5 years of his young career.

Now in Week 11, Justin Jefferson can make history once again against the Dallas Cowboys.

Minnesota hosts Dallas at 3:25 PM CST on Sunday afternoon, and they’ll have a chance to extend their winning streak to 8 games. Doing so and forming a 9-1 record through 10 games all but guarantees that they’ll be a playoff team come January.

However, that’s not the only storyline to watch. As it turns out, Jefferson can set the record for most receiving yards through a player’s first three seasons in this game.

Currently, that record is held by Randy Moss, who recorded 4163 receiving yards over the course of his first three seasons. Right behind him is Odell Beckham Jr., who put together 4122 receiving yards from 2014-2016. And now, nipping at their heels is Justin Jefferson, who has put up 4076 receiving yards through his first 42 NFL games.

This means that after a ridiculous 193-yard game in Buffalo during Week 10, Jefferson needs 94 yards on Sunday to hold the three-year receiving record all by himself. Folks, the Vikings still have an additional seven games to play after the conclusion of Week 11.

This pace that Jefferson has set for himself is truly historic. In fact, the star wide receiver could sit out the final 8 games of 2022 and miss all of the 2023 season and still finish in the top-30 for most receiving yards through a player’s first four seasons.

In addition to this record, Jefferson also has his sights set on the single season receiving record that Calvin Johnson set back in 2012 with the Lions. He set a goal of being the first receiver to break the 2000-yard barrier before the season started, and after his game against the Bills, he’s back on track to do so.

However, the one thing standing between Jefferson and setting the record this weekend may be his health. The third-year receiver showed up on the injury report this week with a toe injury. We shall see if that hinders him at all throughout the week, or if he will be good to go this weekend.

Kickoff between the Cowboys and Vikings is set for 3:25 PM CST at U.S. Bank Stadium. 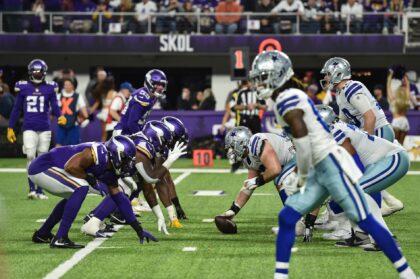