The final injury report features both good and bad news for the Vikings. On the one hand, some players have battled back from injury, allowing them to be ready in time for Sunday. On the other hand, the team will be without two of its defensive starters: Dalvin Tomlinson and Cameron Dantzler.

The positive note is that Adam Thielen – Minnesota’s WR2 – looks like he’s ready to roll. We knew that he was trending in the right direction, but it’s good to confirm he’ll be available to the team. Justin Jefferson gets a ton of attention, so the offense needs other players to step up. Ideally, Thielen can start making more plays.

Furthermore, starting center Garrett Bradbury isn’t featured on the injury report even though he was limited earlier. Bradbury has received no shortage of criticism since being a first-round selection. In 2022, he has been playing significantly better.

Not having Tomlinson and Dantzler means Ed Donatell will need to rely on his depth.

One wonders if Buffalo will target Akayleb Evans early and often. The rookie corner has good length and physicality. Nevertheless, Buffalo’s offensive coordinator might be wise to get Stefon Diggs or Gabriel Davis onto the young guy.

Evans did some good things in the Washington game, especially the play on Terry McLaurin on that crossing route. Being able to replicate that type of focus and compete will be crucial for Evans to hang with Buffalo’s talented pass catchers.

Meanwhile, the defensive line will need to operate without its best DT. That means more snaps will head toward James Lynch, Ross Blacklock, Jonathan Bullard, and Khyiris Tonga. Harrison Phillips – who used to play for the Bills – will also get plenty of snaps.

Buffalo is dealing with their own injury concerns. Starting quarterback Josh Allen is questionable. Allen will get most of the headlines since he’s such an excellent player, but there are several other players who are on Buffalo’s injury report. If Allen cant play, Case Keenum will get the start.

The final injury report for the Vikings suggests that the majority of the starters will be available. Given the strength of the opponent, having close to the full roster is a good thing.

The game takes place this Sunday in Buffalo. It’s scheduled to begin at 12 CST. 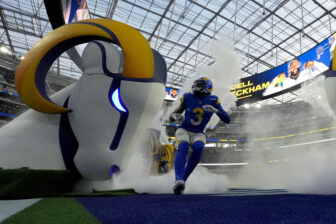