The 2022 NFL Draft happened just a month and a half ago, so some of you may be sick of draft content at this point in the year. That said, I love the NFL Draft, and with very little current Vikings news until training camp starts at the end of July, this felt like a good time to start looking at next year’s class. Here are some of the potential Minnesota Vikings draft needs in 2023, and prospects that could fill them.

Kirk Cousins is under contract through 2023, but that feels like it should be the final year of his tenure as the Minnesota Vikings quarterback. If 2022 doesn’t go according to plan, perhaps they’ll even look at a trade this offseason. That depends on Cousins as he’ll have to waive his no-trade clause.

Either way, the Vikings quarterback position will need to be addressed at some point in the near future. With 2023 projected as being one of the best QB draft classes in recent history, highlighted by prospects like Bryce Young and CJ Stroud, this would be a terrific time to address the position.

Stroud and Young won’t be options for Minnesota unless their 2022 season goes absolutely disastrously. However, there are some intriguing prospects later on in the first round that could garner some attention.

One such player that I’ve had my eye on since he transferred to Boston College is Phil Jurkovec. The senior hasn’t been able to put it all together yet for a multitude of reasons, but the biggest problem has been a wrist injury that he suffered in 2021. Staying on the field is a must in 2022, and if he can pull that off, the athletic quarterback should be a great option for the Vikings in the draft.

Garrett Bradbury seems like he is coming into his fourth NFL season with a big chip on his shoulder after the Minnesota Vikings did not pick up his fifth-year option. The pressure is on for the Vikings center to have a great season, assuming he even wins the starting spot, but what if he doesn’t?

Stop me if you’ve heard this before, but there’s a great chance that Minnesota enters the 2023 draft process with interior offensive line as a big need. They’ve filled out the guard depth nicely through the past two drafts and free agency, but center has largely gone untouched since drafting Bradbury in 2019.

If Jurkovec is the first-round selection, then someone like Georgia’s Warren Ericson should be looked at in the second or third. If Georgia’s mascot wasn’t the Bulldog, I’d say Ericson has been a pit bull in the middle of the offensive line for the 2021 national champs. He has solid chops in both pass and run blocking, plus, he has experience at guard and center, making him a very versatile prospect. Keep an eye on No. 50 when you watch Georgia this season.

Eric Kendricks is under contract through 2023, and Jordan Hicks remains under Viking control until 2024. That said, it may be time to start looking at some replacements for the veterans at the linebacker position. Should Minnesota decide not to address QB next year, perhaps this becomes their position of choice for their first-round pick.

If this is the case, keep an eye on Alabama’s Henry To’o To’o. The linebacker for the Crimson Tide had a terrific 2022 season, anchoring Alabama’s defense on the road to yet another national title game appearance. He recorded 111 tackles and four sacks in his first season after transferring from Tennessee.

To’o To’o is certainly not without weaknesses at this point in time. He needs to improve upon his pass coverage ability to solidify himself as a first-round pick as well as get a little bit stronger when shedding blocks in run defense. That said, he is another prospect to keep an eye on during this college football season. Playing for Bama, we should get plenty of chances to see him under the bright lights. 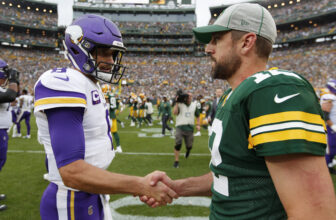