The Minnesota Vikings may have fallen to the Las Vegas Raiders, 26-20, in their first preseason matchup this weekend, but that doesn’t mean it was all bad for the Vikings. There were a number of positive performances from this exhibition matchup, just like there were some bad ones. Here are the winners and losers of the Vikings first preseason game.

Kirk Cousins did not travel with the team this week due to his positive Covid test, so that meant all the reps at QB went to Sean Mannion and Kellen Mond. Mond didn’t need to do much in order to be a winner tonight, considering the effort that his counterpart Sean Mannion put forth at the QB position. Things got off to a slow start for the second year QB, but as the game progressed, he found his rhythm. Mond finished the day with 119 passing yards and a pair of TDs, both of which came in the second half of the game. If he can continue this momentum into the 49ers game, there’s still a chance that Mond could win this backup QB job behind Cousins.

The pair of Ty Chandler and Kene Nwangwu were so effective in the Vikings first preseason game that I couldn’t separate them in this list. Chandler finished the day with five carries for 50 yards and had a 56-yard kick return. Nwangwu rushed seven times for 41 yards and caught a pair of passes for 18 additional yards. The duo has begun making a strong case for the Vikings to keep four RBs on the roster when final cuts roll around.

The stat line wasn’t flashy this weekend for Patrick Jones, but he made his case for being the first EDGE off the bench on this Vikings team. Minnesota had three sacks in the first half on Raiders QB Jarrett Stidham, and Jones’ ability to create pressure was a direct cause of two of them, Danielle Hunter and Za’Darius Smith obviously have the starting spots locked up, but Jones looks like the next man up one-third of the way through preseason.

Jesse Davis may have gotten the start at right guard in Las Vegas, but it was Ed Ingram that emerged as the better player. Ingram has been on a tear over the past week, and that stretch of practices eventually earned him reps with the starters. During the game, Ingram held his own in both pass and run blocking, so if he can keep this effort up against San Francisco, the starting job should be his.

In a deep wide receiver room, Albert Wilson is certainly one of the players on the bubble right now. He made his best case to move up the depth chart after the Vikings first preseason game, though. He had two receptions on the day, and both of them went for touchdowns. Myron Mitchell had a couple nice catches too, but Wilson made his count.

For every winning QB, there has to be a losing QB. Sean Mannion did not do anything to convince anyone that he can perform any better than he did in the 37-10 blowout loss at Green Bay. The throws he made were mostly accurate, but Mannion simply isn’t talented enough to be the Vikings backup QB. Mond has certainly passed him at this point.

Bryant Koback seems to have gotten left behind in the race for the final Vikings running back spots. Chandler and Nwangwu both played big roles in the offense while Koback had a couple drops and his four rushes accounted for just nine yards. The UDFA looks like he will end up on the practice squad this fall.

Chazz Surratt had a very difficult day in terms of wrapping up tackles. He had a couple opportunities to make run stops but simply overran them and allowed backs to break free on multiple occasions. He finished the day with just a single solo tackle, and with limited spots remaining in the Vikings linebacker room, this performance does not bode well for the 2021 third-round pick.

Jalen Nailor said it himself; if he is going to make this Vikings roster, it is going to largely be due to his skills as a punt returner. That plan got off to a rough start in the preseason opener as he muffed his only return opportunity of the day. It wasn’t all bad for the rookie wide receiver; he caught two passes for 22 yards. However, with how many skilled receivers there are on this team, the difference likely will end up being his role on the special teams. He’s going to need to show a lot more next weekend.

Nothing guarantees your spot on the losers list quite like giving up a 23-yard catch on a 3rd-and-24 attempt. It was about as ugly a play as you’re thinking, and overall, it was a tough day for Metellus. Safety is another spot that is going to be cut down rather quickly for the 53-man roster, and with three spots guaranteed to go to Cam Bynum, Lewis Cine, and Harrison Smith, it’s likely that only one other safety will make the final roster. Mike Brown, Myles Dorn, and Metellus are in a battle for it, so plays that stand out for the wrong reason are not ideal. 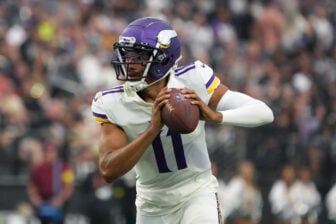