3 Things Vikings Fans Would Love to See Against the Cowboys

One has to think that Vikings fans are feeling pretty good right about now. Following the decision to move on from Rick Spielman & Mike Zimmer in favor of Kwesi Adofo-Mensah & Kevin O’Connell, many believed that the team would improve by a decent amount. Nevertheless, very few could have predicted an 8-1 start.

While the start has been excellent, some Vikings fans still have concerns. Getting to 8 wins in only 9 games hasn’t come easily. On the contrary, there have been several moments when Minnesota has played poorly. At times, it looked like they’d lose, such as the most recent game against the Bills.

On Sunday, the team gets to take on the Dallas Cowboys, an NFC foe with a formidable defense. What should we be looking for in this game?

3 Things for Vikings Fans to Monitor on Sunday

Week 10 featured another missed kick. At this point, we’ve got a trend.

Greg Joseph entered the season with a ton of optimism. He had an excellent offseason; the reports suggested he was drilling kicks – even the long ones – with ease. The performance in the preseason games and then in Week 1 confirmed what we all heard.

Since then, we’ve seen something quite different. As Vikings fans know, Joseph has struggled. He has missed 5 FGs and 4 XPs. It’s always deflating when the offense works hard to get the team into a position to pile on points and then there is a miss.

Given that the upcoming game takes place at home, Joseph will get the chance to kick indoors. Moreover, the next several games will take place in stadiums, allowing him to have some good conditions (as Josh Frey recently pointed out to me).

Dallas is a strong team, so it’s unlikely we’ll see the Vikings win by multiple scores. It’s much more probable that we’ll see another close one. If that’s the case, then getting clutch kicking can make all the difference.

Za’Darius Smith is up to 9.5 sacks and Danielle Hunter stands at 6 sacks. Lately, both have been highly disruptive. Josh Allen is remarkably elusive; if he wasn’t, Smith would have another sack or two to add onto his stat total.

As a team, Minnesota is up to 26 sacks. Most of those belong to the main two edge rushers, but we’ve also seen D.J. Wonnum (3.5), Jordan Hicks (2), Patrick Jones II (2), Dalvin Tomlinson (1.5), and Harrison Phillips (1.5) join the fun. Those six players combine for 10.5 sacks. Let’s not forget that Tomlinson has missed time lately, making the defensive line less formidable. Credit to the depth players for stepping up.

Now, as many have pointed out, an effective pass rush goes beyond just the sacks (as important as they are). Being able to consistently force the QB to make a quick decision often leads to good things. Moreover, putting pressure on the QB can force an offensive coordinator to keep more men back to pass block, leaving less people to corral in coverage.

The one time Minnesota lost coincided with one of the games when Justin Jefferson struggled. It’s that reality that helped prompt Josh Frey and I to debate whether the offense needed to add another weapon.

For the record, I still don’t think adding another WR is the key, but I do believe the offense needs to diversify its investments. Currently, the vast majority of the purple money is being used to buy Justin Jefferson stocks. For the most part, that’s a wise strategy, and yet it’d still be prudent to spread the wealth around a touch more.

T.J. Hockenson certainly helps. The former Lion has been excellent since hopping over to Minnesota. For whatever it’s worth, I’m among those who still believes that K.J. Osborn can be doing more. It’s possible the third-year receiver should start being featured more prominently, especially since he has the capacity to challenge defenses deep.

I’m sure most Vikings fans would agree that a deep TD to Osborn would be a welcome sight. Why not make it a reality in Week 11?

Dallas takes on Minnesota at 3:25 CST this Sunday at U.S. Bank Stadium. 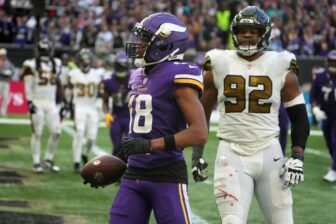