I’m still thinking about the way the Minnesota Vikings dazzled us in Buffalo, and then came home with a letdown, allowing the Cowboys drop a 40-3 bomb on the faith we had all (finally) given our now 8-2 heart-attack-inducing home team. How could they follow up such a gem with such a dud?

Well, with just a little reflection it becomes apparent this wasn’t a shocker. It’s the norm. Our Vikings have, in fact, built a long inglorious history on such week-after collapses.

Pro-Football-Reference.com has a page dedicated to the greatest comebacks in Vikings history, and a quick glance tells us a few eye-opening things. The Bills game of two weeks ago was tied for the sixth-largest deficit that the Vikes have overcome for a win in team history—the largest being 24, back in 1977 against San Francisco. More on that later.

What I find most notable in diving deeper into the past numbers is that there have been 20 comebacks of 14 points or greater in the 63-year history of the franchise. I would have guessed more. And of those 20 comebacks, one occurred on the final game of a lackluster season, leaving no opportunity for a letdown the following week.

In the other 19, the Vikings have an 8-10-1 record in games the following week, and herein lies the sad truth of the matter. One might think that a rousing comeback victory would inspire a squad to greater heights, but more often than not our Vikings expend so much emotional and physical capital in stealing these signature wins that a letdown is highly likely—maybe even the norm.

Not all comeback wins can be so easily defined by the score alone. Some of the most memorable were less about the number of points down, but by how dramatically, and how late in the contest, and how important, the games were.

And there is a litany of these drama games that have left the fans and the team equally spent, meaning a collapse the following week should have been obvious to foresee. The most notable instances include dramatic wins deeply entrenched in Vikings lore, and some of these following-week collapses are entrenched every bit as deeply. Let’s take a look back to remind ourselves that the 40-3 Dallas loss was nothing new:

December 4, 1977: The biggest comeback in Vikings history was engineered by none other than “Two Minute” Tommy Kramer who began earning his nickname in this game late in his rookie season. Fran Tarkenton had been lost to injury, and Bobby Lee was laboring against a sub-.500 San Francisco 49ers squad.

The Vikings were down 24-0 at the half, and 24-7 after three quarters when Bud Grant brought Kramer into the game. Kramer promptly led Minnesota down the field three times, each culminating in a touchdown pass—to Ahmad Rashad, then Bob Tucker, then Sammy White—and when the dust settled, the Vikings left the 12-degree weather at Met Stadium with a 28-27 victory.

A week later, the Vikings managed one early touchdown and another late in garbage time, losing convincingly to the Oakland Raiders, 35-13. Minnesota managed 11 first downs against 7 turnovers in this Letdown Special.

December 14, 1980: The Cleveland Browns took a 23-9 lead early in the fourth quarter, when “Two Minute” Tommy reprised the drama from three years earlier. Again, he led three scoring drives culminating in TD passes (once to Ted Brown, twice to Rashad) as the Vikings piled up 530 total yards, 455 through the air, in a stirring 28-23 win.

Seven days later, Kramer threw four interceptions as the Vikings gave away a 13-3 halftime lead in a loss to the Houston Oilers. Worse, the malaise continued the next week, as Philadelphia outscored Minnesota 24-2 in the second half en route to a 31-16 playoff defeat for the purple.

December 27, 1997: In the only top-20 comeback win to occur in a playoff game, the Vikings found themselves down 19-3 to the New York Giants at halftime. Randall Cunningham engineered the comeback that culminated with a 24-yard Eddie Murray field goal for the 23-22 win in the NFC wild card game. The following week the 49ers led 38-14 before a late TD and 2-point conversion pulled the Vikings within 16 in a 38-22 loss to end their season.

January 6, 2001: One of the biggest Viking wins in memory wasn’t defined by the comeback, but by their grit. The 2000 edition of the Purple had started 11-2, then lost the last three games of the regular season to enter the playoffs at 11-5, with losses to playoff bound St. Louis Rams and Indianapolis Colts, and to rival Green Bay.

With a close like that, many questioned the squad, like the current one, wondering if they were good enough to beat playoff-caliber competition. The Vikings proceeded to win big against New Orleans, 34-16, effectively erasing all the doubts.  And then, in New York, the underdog Giants covered the 1-point spread and then some in defeating the Vikings decisively in the ultimate Minnesota egg-laying game.

40-3 leaving you feeling like your world has been rocked, and not in a good way? Try an NFC Conference Championship game culminating in a score no Viking fan can hear without enduring blinding headaches and delirium tremors: 41-0.

October 23, 2005: The only comeback among the top fifty (10+ points) that features the rival Green Bay Packers. The Vikings were down 17-0 at the half, Daunte Culpepper outdueled Brett Favre in the second half, with the Vikings pulling ahead with 3:10 to play, 20-17.

Favre marched the Packers downfield, and Ryan Longwell drilled a 39-yard field goal to tie the game at 20 with just 24 seconds remaining. Paul Edinger responded with a 56-yarder as time expired, giving the Metrodome crowd a rousing 23-20 victory. The following week, the Carolina Panthers thrashed Minnesota, leading 38-7 before a late Brad Johnson touchdown pass ended the scoring at 38-13.

January 14, 2018: Do I need to remind you? The Minneapolis Miracle—Case Keenum to Stefon Diggs, against the hated New Orleans Saints and their hated coach, “Bountygate” architect Sean Payton, gave the Vikings an improbable come-from-behind 29-24 victory as time expired on the NFC playoff game. Pandemonium ensued, the national media discussed Diggs’ catch-and-run in much the same way the Bills comeback, and the miraculous Justin Jefferson catch that enabled it, became fodder for sports talk shows nationwide.

Much like 40-3, and perhaps more so like 41-0, this too was followed by an appearance in the NFC Championship game where the Vikings again laid a massive egg, losing 38-7 to the eventual Super Bowl Champion Philadelphia Eagles.

Each win brought them to the holy land of the Super Bowl. 46 years later, only a few of us can even remember how big that was—the Vikings playing in the Super Bowl was then, as it is now, a dream scenario, and the Vikings achieved that four times in seven seasons.

Of course, each and every time, those biggest of big Championship Game victories were immediately followed by The Letdown. Four Super Bowl losses, including two (the first against Kansas City and the fourth against Oakland) as clear favorites.

So, you see? Viking Letdowns are the natural follow-up to the most amazing Viking wins. This is why Viking fans everywhere should be rooting for all games from here on out to be, above all, boring. If the Vikings can win more games than they lose the rest of the way, each in boring fashion, and then string together a dull series of post-season victories, there will be no monumental highs from which the squad can fall.

If the rest of their season is bland and boring, perhaps they can save one last awe-inspiring, earth-shattering, I-Can’t-Believe-I-Just-Saw-That victory for the ages for the very end. Then, the only following-week letdown will occur on a beach somewhere in mid-February. 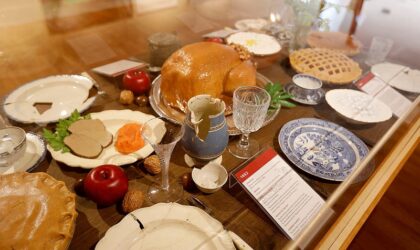 Also Read:
A Thanksgiving Feast Fit for a Viking
Share: