A Step Forward for the Vikings Offensive Line in Week 12

In the midst of a rather dependable season by the Vikings’ offensive line, they turned in a disastrous performance against the Dallas Cowboys. The unit allowed 7 sacks in pass protection for QB Kirk Cousins, as well as a 63% pressure rate per ESPN, the highest Cousins has dealt with in his career.

However, in Thursday’s Thanksgiving showdown against the New England Patriots, the Vikings offensive line had a much more formidable showing.

Looking in foresight, Thursday was set to be a bad match up for the Vikings OL, who were down their stud-LT Christian Darrisaw due to a concussion. They would be forced to throw in tackle Blake Brandel, who in his third season with the Vikings, had yet to see much action.

To add to the Vikings worries, the New England Patriots have been stellar this season rushing the passer. They’re second in total sacks in 2022 with 37.0, behind only the aforementioned Dallas Cowboys. Their star edge rusher, Matthew Judon, has led the NFL in sacks by a player this season and is second in QB pressures.

Minnesota’s offensive line was up to the task, though. They allowed just one sack on Kirk Cousins, by Patriots’ linebacker Josh Uche on a pass-rush win against Vikings LT Blake Brandel, who made his first NFL start on Thursday. In addition, QB Kirk Cousins saw pressure on ~39.5% of dropbacks (15 of 38), per Pro Football Focus, a mark to be proud of in comparison to this past Sunday.

For the Vikings’ starting-OL, it was just 9 total pressures allowed on Thanksgiving. They, as a whole, graded out very well against New England, again per PFF. RT Brian O’Neill led the team with an 81.5 pass-block grade, followed by C Garrett Bradbury with 80.5, RG Ed Ingram with 72.8, LG Ezra Cleveland with 66.1, and finally LT Blake Brandel with 62.9. The line was only penalized once, off a holding call against RG Ed Ingram.

The Vikings should all be pleased with this bounce-back performance just 4 days removed from a poor showing versus the Cowboys. The genesis of the offensive struggles on Sunday came from the pass-protection, and it was certainly much better on Thursday, which speaks to the level of focus from the coaches and players in the locker room. 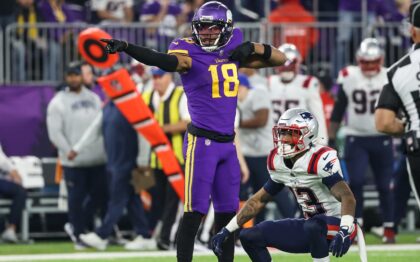