I haven’t followed the team for too long. I started cheering for them back when Kevin and Pat Williams were in town. They added Jared Allen and Adrian Peterson. I was sold. Little did I know that I was beginning a journey of heartbreak, disappointment, and disaster.

At present, the mood is quite different among Vikings fans. The team sits at an impressive 9-2, the second best record in the entire league. Very few would have anticipated such excellence. The unexpected rise to elite has many people wondering about how far this team could go. Is a deep playoff run implausible?

People who are older than your humble author will be able to recount horror stories of all of the Vikings’ major playoff losses. There are some out there who have lived through all the Super Bowls and Minnesota’s NFC Championship losses. Those who have a more personal understanding of team history may already know about the critical trend to which I’m referring.

Take a look at the last 6 times the Vikings have made it to the NFC Championship Game:

The first and most notable trend rests in the mere fact that Minnesota has fallen short in the NFC Championship Game six straight times. As a result, a lot of fans have been conditioned to expect heartbreak.

It’s also worth noting that the past three opportunities – 2000, 2009, & 2017 – all featured road games. Minnesota hasn’t hosted an NFC Championship game in this millennium. Can we place all the blame for those losses on the fact that they played on the road? By no means. The New York and Philadelphia games were blowouts, so simply changing the field wouldn’t have been enough to turn an “L” into a “W.”

That being said, it’s notable that 5 of the 6 games occurred on the road. The last 3 have all been on the road.

Coaches and players commonly talk about how excellent the fans are at U.S. Bank Stadium. I see very little reason not to believe that they’re telling the truth. Playing at home in front of raucous, boisterous, exuberant support does make a difference, even if it’s just a small advantage.

In the playoffs, teams are covetous of any possible advantage.

The season is fast approaching its conclusion. Only 6 games remain for the purple and gold, the first of which will occur this Sunday when the New York Jets visit. Turning that game into the season’s 10th win would keep Minnesota in the hunt for that #1 spot in the NFC. The current playoff picture favors the Eagles, but hopefully Minnesota can give themselves a shot at home-field advantage and the opening round bye. 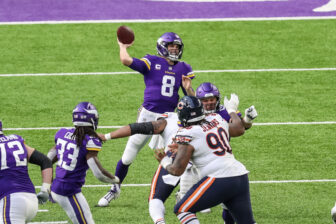