Matt Daniels is a Nickname Machine

Like many others, I first noticed when we were hearing the chatter about Mr. Wright. Admittedly, that’s an easy one since it builds off Ryan Wright’s last name. Nevertheless, Matt Daniels foreshadowed how the 2022 Vikings season may feature a great purple nickname or two.

It’s easy to like Daniels. He’s charming and energetic when he speaks to the media. He obviously cares about football and spends a lot of time trying to find ways for Minnesota’s special teams to play well. At times, he has been successful, though there have been some issues (especially for the returners and the kicker).

Issues aside, Matt Daniels is likely keeping things relatively upbeat in the meeting room with the help of the various nickname options.

Dan Chisena, for instance, is “Hot Sauce.” Kicker Greg Joseph is G-Money and long snapper Andrew DePaola is Sir Po (a personal favorite). Oh, and for whatever it’s worth, switching from Mr. Wright to “The Stallion” may indeed be a wise move. Or, perhaps, lean on both nicknames.

As I’ve explained before, the sense I have is that the NFL season can be a grind for the players. A ton of hard work goes into preparing for games and, of course, the actual games themselves. Quite often, that effort doesn’t get rewarded with a win (teams don’t always start 6-1, as Vikings fans know). Being able to still show up and enjoy oneself at the practice facility is crucial.

Minnesota’s next game will take place on Sunday when they travel to Washington to take on the Commanders. I imagine this will be a game where several Vikings will have some extra motivation given that it’s Kirk Cousins’ former team.

Matt Daniels and the special teams can make life considerably easier by ensuring the returns set up Minnesota with great field position. Continued excellence from the tacklers will also help to ensure the field position is strong. Moreover, seeing a perfect day for the field goals and extra points would be a welcome change. 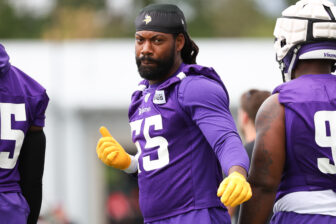