The Kwesi Adofo-Mensah FA Additions Have Been Making the Difference

Kwesi Adofo-Mensah didn’t have an easy job. He was taking over an underperforming team with a clear mandate: get the team back on track with largely the same roster. Money would be tight, and yet the ownership insisted on the team continuing on a certain trajectory for 2022.

After Week 12, the team is standing at 9-2, so the Wilfs’ insistence that Minnesota could compete in 2022 looks prescient. How did we get here? One answer is that a lot of the players Adofo-Mensah brought in have helped.

Kwesi Adofo-Mensah, The Good and Bad in Year 1

At the top, we’ll acknowledge that some of the deals didn’t work out. It was always a peculiar decision to bring Jesse Davis aboard given that he didn’t play particularly well previously (at least according to PFF). The GM acknowledged that error when he decided to move on from the veteran, trading him away to Pittsburgh for a late-round pick (and leaving behind $800,000 in dead money).

Other FAs have been a touch underwhelming. Chandon Sullivan has played a ton, though he has struggled a fair bit. He’s coming in at 81st overall out of 123 corner on PFF. Backup OL Chris Reed hasn’t made an appearance for the offense, an especially notable reality given that Ed Ingram has had more than his fair share of tough reps.

Look at some of the other players he brought aboard, though:

Just think of Smith. He won the NFC’s Defensive Player of the Month Award in October. He’s up to 9.5 sacks, providing the team with some much-needed pass rushing ability. Where would Ed Donatell’s group be without the former Packer? Things are already tough out there, so it’s safe to say things would be pretty ugly.

We might also think of the GM’s decision to acquire Nick Mullens, Ross Blacklock, and especially T.J. Hockenson. These players were acquired via trade, and yet they point to the GM’s willingness to keep searching for talent. Kwesi Adofo-Mensah has made several decisions that look pretty good right about now, and trades have been a part of that. Hockenson has pushed the passing game to a new level.

If we kick things back even further, we can scrounge up some praise for his willingness to rework the Kirk Cousins contract. The starting QB has been fantastic in 2022, a main reason why the team is thriving. We can say something similar for Danielle Hunter, the oft-injured pass rusher who was no guarantee to be brought back given the cap hit. Oh, and he signed Patrick Peterson to a modest deal (who is going to demand a lot more in the offseason).

Obviously, we’re going to need more time to see how things shake out before declaring these decisions a complete success. After all, we’re not even through Year 1 with Adofo-Mensah steering the Viking ship.

Nevertheless, it’s hard to look at the team’s record and be displeased with how things have gone. The main three ways of acquiring talent – drafting, trading, signing – have all been used by the GM. Many of the players brought in through trades and signings have become critically important players for the 2022 Vikings.

Kwesi Adofo-Mensah can only sit back and watch. Sure, he might be able to sign a player or two when there is need, but the vast majority of the work has been done. The onus currently falls on the players and coaches when it comes to Minnesota reaching its potential.

Given the strong record, the Vikings are a near lock to be playing meaningful football as the calendar leaves 2022 in the rear view mirror. The solid work that Adofo-Mensah did during these past several months will impact how far this team can go at the beginning of 2023.

No one knows how the year will end. What we can say, though, is that we’re watching a team that has continued to exceed expectations. We can also say that several of the players whom Kwesi Adofo-Mensah brought in have been a major reason why.

Editor’s Note: Information from PFF and Over the Cap helped with this piece. 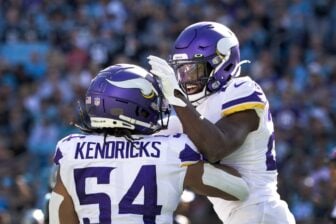