The Vikings Will Soon Face Another Former Minnesota QB

This past weekend, the Minnesota Vikings did in fact end up playing against their former first-round pick, Teddy Bridgewater. The Dolphins backup QB came in relief for rookie Skylar Thompson, who left the game with a finger injury. The Vikings won the game and sacked Bridgewater five times, but the former Viking played relatively well against his old team. Now, as news around the league emerges in the aftermath of Week 6, it seems the Vikings will face another former Minnesota QB in just a few weeks.

During Thursday night’s game against the Chicago Bears, Carson Wentz fractured his ring finger on his throwing finger. Though he toughed it out for that game, Wentz is now headed for a stint on IR, with a timetable of 4-6 weeks for his recovery.

While Wentz is out, it appears that Taylor Heinicke will step back into the role of starting QB for the Commanders. During 2021, he was the starter in 15 games, leading Washington to a 7-8 record. Over those 15 games, Heinicke completed 65% of his passes for 3419 yards, 20 TDs, and 15 INTs. Washington finished 7-10 on the season, missing out on the playoffs.

Prior to joining the Washington Commanders, Heinicke was a journeyman across the league for a few years. He started two seasons at Old Dominion in college, including the program’s transition year from the FCS to the FBS in 2014. Over those two seasons, he completed just under 67% of his passes for 7498 yards, 63 TDs, and 23 INTs. In 2014, he was third in Conference-USA in passing touchdowns with 30.

Despite some of his success, Heinicke came into the NFL as an undrafted free agent in 2015. Ultimately, the Vikings signed him to be a competition QB for the preseason. During that 2015 preseason, the rookie QB played all five games (including the Hall of Fame game), and he completed 59-of-82 passes (69.5%) for 516 yards, two TDs, and an interception.

When Mike Kafka got hurt, that opened up the door for Heinicke to be the Vikings third string QB for the season, but he did not break onto the field for a regular season snap.

After what should be considered a successful rookie season for an undrafted QB, both the 2016 and 2017 seasons were derailed by injuries. Since that 2015 season with the Vikings, Heinicke has bounced around the NFL. From 2017-19 he had stints on the New England Patriots, Houston Texans, Carolina Panthers, and eventually landed in the XFL with the St. Louis BattleHawks.

He was drafted onto the BattleHawks prior to the 2020 season, but he did not appear in any games for the team. This was caused by the league suspending operation due to the COVID-19 pandemic. Then, during the 2020 NFL season, Heinicke found is final landing spot with the Washington Commanders (then Football Team).

During the 2020 regular season, Heinicke didn’t see the field, but he ended up being thrust into a starting spot for the Wild Card playoff game against Tom Brady and the Tampa Bay Buccaneers. Washington lost that game, 31-23, but Heinicke played well enough to keep things close. He completed 59% of his passes for 306 yards, a TD, and an INT. He also added 46 rushing yards and a rushing touchdown.

This game earned him the starting job for most of the 2021 season, and he now enters the role again for the foreseeable future in 2022. He’ll meet the Minnesota Vikings, who gave him his first chance in the NFL, during Week 9. Kickoff is set for 12 PM CST on November 6th at FedEx Field. 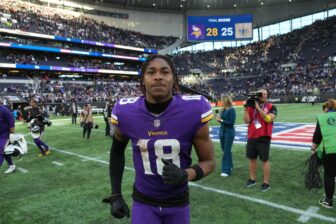