Who Should Be the Next Vikings Quarterback? 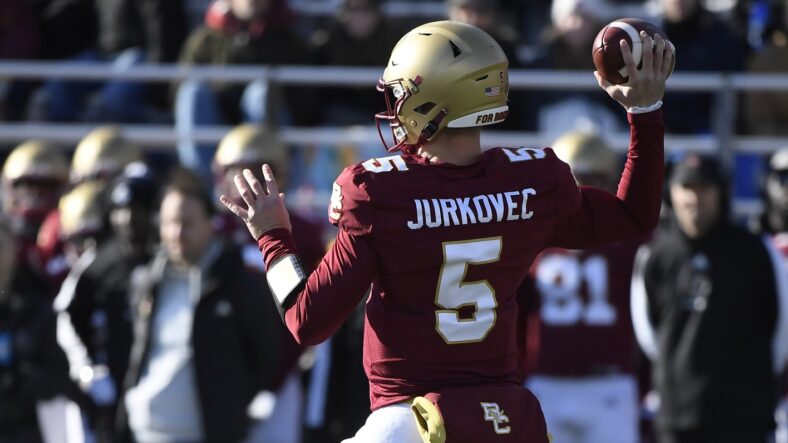 Training camp for the Minnesota Vikings officially begins later this month, but for now, we still have a few weeks to kill with offseason topics. With that in mind, we’re going to talk quarterbacks today. Namely, who should be the successor to Kirk Cousins as the Vikings quarterback when the veteran eventually leaves?

Of course, we all remember that Cousins signed an extension with Minnesota this offseason. The reasons for this were two-fold. First of all, it gave him a secure spot on the roster for 2023. Secondly, the Vikings were able to free up some cap space in 2022 to sign free agents. Cousins is set to make $31.416 million in 2022 and $36.25 million in 2023.

With Cousins’ new contract came the inclusion of a no-trade clause, meaning that it is extremely likely that the trade chatter will not be nearly as loud next offseason as it was this past winter. Even so, Minnesota needs to keep the future of the position in mind. Quarterback is the most important position on the field, and there needs to be a plan in place for life after Cousins.

There have already been rumors flying around in this regard. Last year, Minnesota drafted Kellen Mond, and many believed he was QB of the future. After his difficult rookie year, that may have changed, and more recently, Baker Mayfield was rumored as a potential trade target in recent weeks. Those have died down now too, and there is very little traction for any other potential future Vikings quarterbacks right now. Let me rekindle that fire with a new name: Phil Jurkovec.

During his first two collegiate seasons, Jurkovec did not see much playing time with Notre Dame. He had just 18 pass attempts over the 2018 and 2019 seasons. Following the 2019 campaign, the QB transferred to Boston College where he was all but guaranteed a starting spot.

He did start in 2020, playing 10 of Boston College’s 11 games. The Eagles went 6-4 in those games, and Jurkovec completed 61% of his passes for 2558 yards, 17 TDs, and 5 INTs. Not quite the impressive season that many were hoping for out of Boston College, but a start nonethless.

There were big expectations for the Eagles in 2021 now that Jurkovec had gotten a year to learn the system. Then disaster struck. In the second game of the season against U-Mass, Jurkovec hurt his throwing hand, and some suspected that the injury would keep him out for the remainder of the season. He was able to return in November to finish out the season, but by that point, the hopes of competing for an ACC title were just about over. In total, Jurkovec played six games and completed 54.2% of his passes for 914 yards, seven TDs, and four INTs.

Jurkovec now heads into his redshirt senior season with a lot to prove. He has one more chance to show he can make it in the NFL before having to enter the 2023 NFL Draft. There are a number of things to improve upon, but first and foremost, Jurkovec must find a way to stay on the field in 2022. Besides the injuries discussed in 2021, he also suffered a knee injury that kept him out of the 2020 season finale. For an NFL franchise to trust him with an early-round pick, he needs to be available to play.

In terms of actual ability, Jurkovec is a well-rounded player. He doesn’t have a cannon for an arm, but he has the ability to make most throws. He also doesn’t panic under pressure and can provide a little bit of mobility as a scrambler. It would be nice if he was more accurate with his throws on a consistent basis and to see that completion percentage approach the 65% mark.

As of now, Jurkovec seems like a prospect somewhere between Baker Mayfield and Ben Roethlisberger. He’s got decent size on him, standing 6’5 and 226 pounds, and while he would prefer to stay in the pocket, he is comfortable rolling out.

Jurkovec in Minnesota is a very intriguing fit, especially with Kevin O’Connell at head coach. There’s a good chance that the Vikings offense plays a much faster, modern offense in 2022. There is youth all over this unit. They have young wide receivers, offensive linemen, and even running backs. However, the missing link has always been a QB on a rookie deal. Should Jurkovec consistently stay on the field and clean up some of the problems with accuracy, it makes a lot of sense for Minnesota to take a chance on him in the first round of the 2023 draft as the next Vikings quarterback. 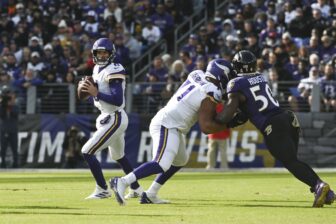