Which Vikings Player Has The Best Shot at MVP? 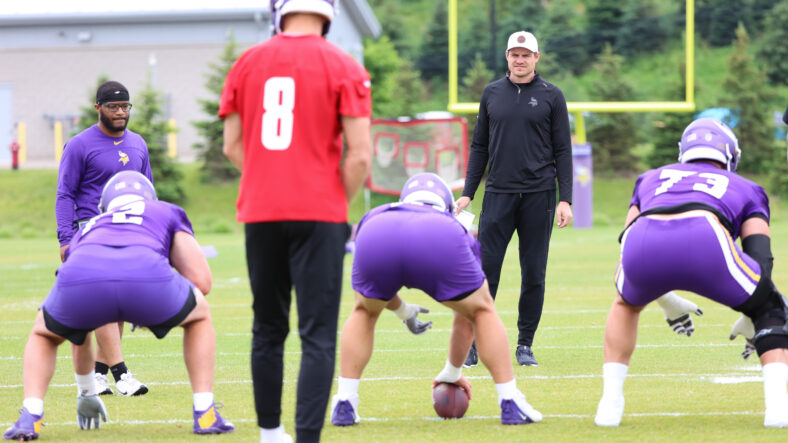 The Vikings player with the best shot at MVP is probably Kirk Cousins.

Some will instinctively scoff at that statement. A large portion of the Vikings fanbase – and the broader group of NFL fans – believe that Cousins is merely average. While average isn’t quite right, there’s some truth in the sentiment. He has been elite for stretches of games, but Cousins has never been among the very best QBs.

With all that in mind, why the suggestion that Minnesota’s QB1 actually has the best shot of anyone on the roster? Well, it’s the basic reality of the award. It almost always goes to a quarterback since it’s, by far, the game’s most important position. Take a look at the list of past MVP winners. QB dominates the competition, so much so that the amount of non-QBs to win the award since 2000 can be counted on a single hand:

Admittedly, I’m cheating a little since Faulk is there twice, but the point remains. Since 2000, it’s only been RBs and QBs to have won the award. The RBs don’t win very often, and it’s becoming increasingly rare.

While some have suggested Dalvin Cook, I think the likelihood of him winning is very low. Jonathan Taylor put up a remarkable season in 2021, finishing as a first-team All Pro. He had more than 1800 rushing yards and 18 TDs but he still lost to Aaron Rodgers. The only other name we could think of would be Justin Jefferson, but a brilliant season from the WR1 is far likelier to result in an Offensive Player of the Year Award. And, unless something totally unforeseen happens, a defensive player won’t win. Aaron Donald hasn’t won, so a Minnesota defender isn’t going to snag the award.

All of this brings us back to Kirk Cousins and that league MVP distinction. To be perfectly honest, I think the chances of him winning are close to zero. He’d not only have to improve on his already impressive stats, his team would need to win. So far, the winning portion of things has been stubbornly elusive for Mr. Cousins.

Where he might have a glimmer of hope rests in the high-end skill he’ll be working with. His pass catchers are going to be excellent. If Kevin O’Connell is an incredible head coach and play caller, Cousins may take a step statistically. With Klint Kubiak, Cousins cleared 4000 yards passing and 30 TDs (and don’t forget he missed a game due to Covid). It’s not that difficult to envision a scenario where he flirts with 40 TDs and 5000 yards.

If that scenario occurs, then it’ll come down to Minnesota’s record (as well as who else excels next season). Going 12-5 while snagging the North would be as surprising as it is exciting. People around the NFL would take notice of a QB who put forth great numbers alongside a great team performance. Indeed, such an outcome might involve Kirk Cousins being an unlikely MVP.