What Kind of Role Can We Expect For Rookie Ty Chandler? 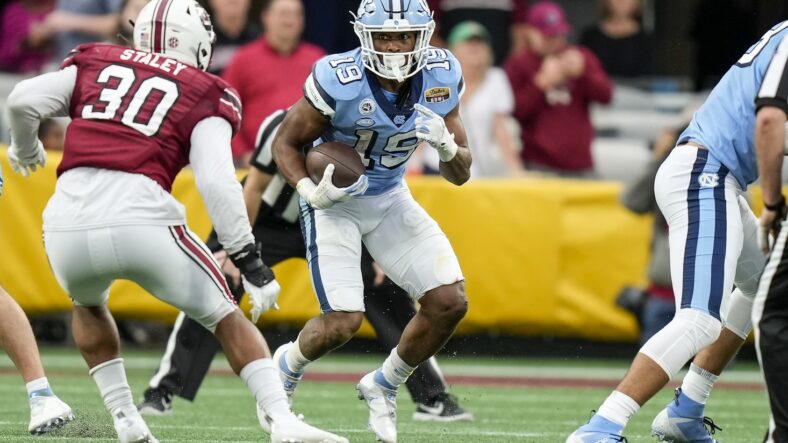 The Vikings running back room looks crowded. Dalvin Cook, as per usual, will be featured prominently. Alexander Mattison is a strong RB2, and Kene Nwangwu’s success on special teams may prompt the coaching staff to integrate him more on offense. Even still, Minnesota opted to use a fifth rounder on RB Ty Chandler.

Chandler ran a 4.38 forty at the combine, so it’s understandable that teams are attracted to his speed. Speed really scares defenses. Put simply, it’s very challenging for a defense to cover multiple players capable of blowing past their one-on-one matchup.

Heading into the draft, PFF suggested that Ty Chandler ought to go in the sixth. They concluded that he’d appeal almost exclusively because of his aforementioned speed: “If you want speed, Chandler has it. That’s the extent of his skillset that NFL teams will value.” PFF notes that he turned 17 targets in 2021 into 14 catches and 211 receiving yards. It’s not good that he had one dropped pass, though the yards per reception average is impressive, especially for a RB. Each catch, on average, went for 15 yards. For context, Justin Jefferson averaged 15 yards per reception last season; Cook averaged 6.6.

My point isn’t that Ty Chandler is somehow already a better back than Cook or anywhere near Jefferson’s level. Rather, it’s merely to point out that he’s an explosive player with the ball in his hands. His catches didn’t just go for a couple yards.

The Vikings, in all likelihood, would welcome some greater production from their running backs on third down. Chandler will need to earn this role, showing that he’s capable of not just catching balls but keeping Kirk Cousins upright in pass protection. Indeed, being a great third-down back is about more than just catching the ball. Being able to stifle blitzing linebackers is a surefire way to impress both the QB1 and head coach.

Making the jump from college ball to the NFL isn’t an easy one. The game is faster, the strategy more sophisticated, and the players are stronger. Nevertheless, Ty Chandler has the kind of speed that will stand out even in the NFL. Last year, Nwangwu showed that a super fast rookie RB can have an impact in a limited role. Perhaps Chandler will show something similar on offense.