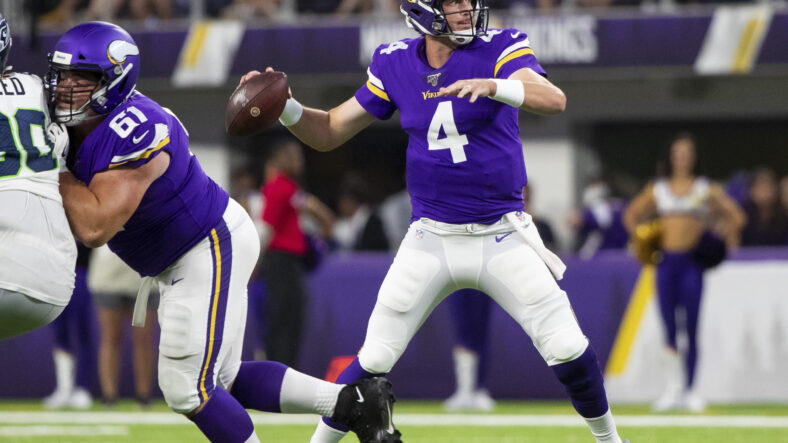 Every year, we see players cut who many thought would make the roster. We can be reasonably confident, then, that at least a couple cuts will rise to the level of being at least somewhat unexpected. Josh Frey took on a similar idea in his recent claim that the Vikings might have Alexander Mattison as one of the cut candidates. That’d certainly qualify as a controversial move, one that I don’t foresee happening (but that’s still possible).

I’ll be doing my best to avoid completely implausible scenarios. Kirk Cousins, to the dismay of many, isn’t going anywhere. His contract essentially guarantees he’s sticking around. Of course, that’s an extreme example; even the most vocal Cousins critics wouldn’t suggest he ought to be cut, but hopefully you see the point. Certain players have a contract that makes a cut nearly impossible. There are some, though, who we might deem as being somewhat “controversial” insofar as many expect them to be on the team.

Since free agency, the assumption has been that Sullivan has the upper hand in the slot corner competition. Perhaps he still does. That being said, one wonders if other players end up being better for the job. Cameron Dantzler and Patrick Peterson are primarily outside corners, but perhaps Andrew Booth Jr. has what it takes to do well in the slot. I’ve also been impressed with Nate Hairston when watching him for Denver last year. Will there be some combination of corner talent that leaves Sullivan on the outside looking in?

Lacking a strong QB2 is concerning. It’s not often that Cousins misses time, but if he does the Vikings are in trouble. Mannion is being kept because of his ability to help Cousins prepare; Mond is being kept because of his potential to develop into a good QB. It’s possible Kevin O’Connell decides that both are too important to cut, leading Minnesota to three QBs on the roster. Of the two, it’s Mond who would be the most controversial cut.

I like Joseph and think that he’ll be on the team. Nevertheless, it’s hard to ignore the fact that his entire cap hit would come off the books if he was cut. The team thus has a lot of freedom to move on from him if they wanted. Doing so, obviously, would require them to bring someone else in. My best guess is that Kwesi Adofo-Mensah will look to add competition either before training camp or at some point shortly thereafter. If that occurs, Joseph will need to earn his spot.

At this stage, it’s hard to come up with an airtight reason to keep him. He was a third-round selection in 2021 and we all knew it was going to take some time for him to adjust to playing linebacker in the NFL. The issue, of course, is that he made essentially no impact as a rookie. Will the new leadership group be as patient with him as the former one? For whatever it’s worth, he did run a 4.58 forty and put up 25 reps on the bench press before the draft. If he can’t become a strong special teams tackler, Surratt will be cut.

Admittedly, this one is the least likely of the bunch. I don’t believe he’ll be cut (or even that he should be cut); a trade is possible. My rationale simply rests in the reality of his opening three seasons. After being chosen in the opening round in 2019, Bradbury has shown very little to suggest he’s a starting-quality center. The team, of course, would need to bring someone in to take his spot. As we’ve recently pointed out, J.C. Tretter is still out there. To be clear, the indicators all suggest he’ll be back. Nevertheless, moving on from Bradbury – most likely through a trade – won’t be entirely surprising since he has struggled.