The Skol Debate: Are the Vikings Among the Top Teams in the NFC? 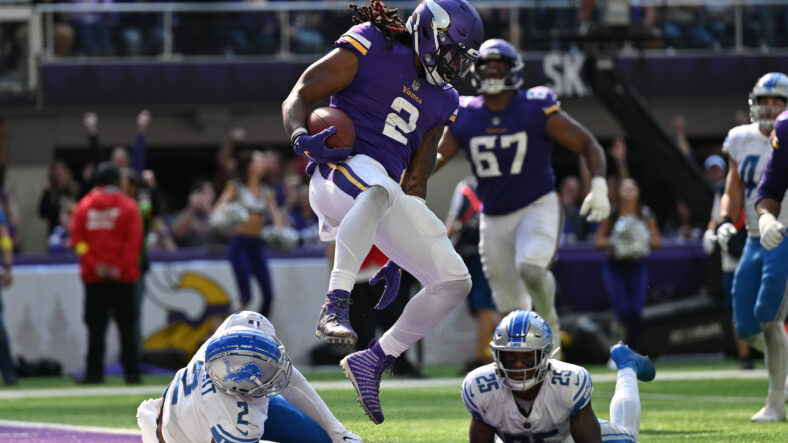 Recently, we decided to put together a debate between Josh Frey and K. Joudry. The point wasn’t to have a hostile, bitter argument. Rather, the hope was to take on a topic that was pertinent to the Vikings and then explore a couple competing perspectives. The question for the first iteration: are the Vikings among the top teams in the NFC?

In the purple corner is Mr. Frey, who is arguing that Minnesota ought to be considered among the conference’s best teams. Keep in mind that crucial word: among. We both agree the Philly deserves top spot and then from there it’s a touch more unclear. So, don’t misunderstand. Josh isn’t insisting that Minnesota is the clear-cut best team in the conference.

In the gold corner is Mr. Joudry, who is taking the more cynical view. Are the Vikings among the top teams? He’s pursuing the “no” option. Readers can decide for themselves which perspective is more convincing.

Are the Vikings a Top NFC Team?

KJ: Well, Josh, I’m taking the more cynical view on this one.

Currently, the Vikings find themselves at second overall in the NFC with a healthy 3-1 record. If things proceed as we all expect, that record will jump up to 4-1 following their Week 5 game. Even still, I’m leaning toward “no” in this debate. To my mind, several other teams have a better chance of winning the conference.

Am I misguided on this one? If so, why?

JF: There’s certainly reason to have doubts this early in the season, especially given some of the wacky games that the Vikings have played. That said, the Vikings have played strong football this year against tough opponents. They currently sit with the No. 2 seed in the NFC, and that feels about right with how the conference has looked so far.

Moving forward, the Vikings schedule should continue to get easier up until Thanksgiving. If they win games against lesser teams, they have a great chance to create a gap between themselves and borderline playoff contenders.

I suppose my biggest question right now would be, outside of Philadelphia, who are you concerned about overtaking Minnesota in the standings?

KJ: Alright, so here’s the thing: the Vikings may be able to pile up more wins in the coming weeks – I’m certainly hoping that’ll be the case – but that doesn’t necessarily mean they’re among the very best teams in the conference.

Their defense is allowing 394.5 yards per game at the moment, which is 27th in the NFL. At times, the defense has looked uninspired; I certainly expected more production from the top two edge rushers. Meanwhile, the offense has had some nice moments, but Kirk Cousins is averaging 1.5 TDs and 1 INT per game. That reality scares me, especially since Dalvin Cook is already dealing with an injury.

Philadelphia deserves the top spot in the conference. Of that there can be little doubt. I recognize that things look a bit off for both the Rams and the Bucs, but I’d still have a tough time putting the Vikings ahead of them given recent seasons. The Packers, moreover, ought not be overlooked. I don’t believe they have what it takes to claim the NFC, but Aaron Rodgers is a sensational player. Oh, and let’s not forget the 49ers. Their defense might carry them.

Perhaps we could say that the Vikings are a top 5 team in the conference with potential for more. That’s debatable, though. Have we seen enough for them to be in the top 3?

JF: Just like the other teams finding ways to improve cannot be overlooked, neither can the Vikings. Sure, the defense has given up copious amounts of yards to opposing offenses, but they remain among the top-12 in points allowed. That is no small feat considering the Vikings finished 29th in 2020 and 24th in 2021 in this category.

As for the pass rushers, we can’t forget that, as a whole, the Eagles and Lions arguably have the two best offensive lines in the entire NFL. The Saints aren’t too shabby in the trenches, either.

Finally, I’ll be the first to admit that the Vikings offense has been clunky through four games. Kirk Cousins and Co. have been uncharacteristically inefficient, especially in the red zone.

Once again, look at their opponents. The New Orleans Saints have allowed the ninth fewest passing yards. The Eagles are seventh. The Packers come in third. Even still, the Vikings are 2-1 against these teams.

The Eagles game certainly was a punch in the mouth for everyone on the team, but since then, the offense has responded. Games against the Bears and Dolphins provide great opportunities to get into a true rhythm, and I fully believe they will be able to do so.

As for the other contenders, the stems of the troubles for the Bucs and Rams have come from the offensive lines. LA lost Andrew Whitworth to retirement and haven’t been able to replace him. Stafford has been sacked 16 times already, and when he isn’t on the ground, everyone knows he’s throwing the ball to Cooper Kupp. The Rams offense is bland for the first time in the Sean McVay coaching era.

Meanwhile, the Bucs are one of the worst rushing offenses in the league after losing multiple interior linemen, including star center Ryan Jensen. They relied on Tom Brady for almost all their offensive production last year, and it eventually caught up to them. I don’t see things going any differently in 2022.

However, San Francisco would be the team I’m most nervous about other than Philadelphia simply because they have a roster built for playoff football, including their Swiss Army knife, Deebo Samuel.

My hope is for the Vikings to definitively prove that they’re among the top teams in the conference in the coming weeks. They can do so by decisively beating the Bears and then snagging a win against Miami (on the road). At that point, we’d have seen them go 3-0 in the NFC North, come back at least a couple times (with game-winning drives from Mr. Cousins in Week 3 & 4), and then win a tough one on the road.

If these things occur heading into the bye, I’ll be much more willing to allow myself to have some purple hope. That’s a sentiment that will be especially true if the aforementioned teams continue to stumble a bit, such as the Bucs and Rams.

What are you looking to see as we move toward the bye?

JF: Specifically this week, the biggest thing I’m looking for is efficiency on offense. Converting third downs, scoring touchdowns in the red zone, etc. Statistically, Chicago’s defense is one of the better ones in the league, but they have not gone up against a team with Minnesota’s firepower.

The defense also needs to find a way to put pressure on Justin Fields this week. Fields has been sacked on a ridiculous 19.3% of his dropbacks (per Pro-Football-Reference), making this the perfect opportunity for the Vikings star pass rushers to launch into the rest of the season.

Against the Dolphins, there’s a certain amount of uncertainty as of now with the situation surrounding Tua Tagovailoa. If he is healthy and starts, I’ve predicted this game could be a blowout in Miami’s favor. Their offense is a different beast with him under center, but if Teddy Bridgewater is the starter, Minnesota can win. The defense simply cannot allow Miami to establish the run.

Essentially, if the Vikings look like a smoother team in all aspects against Chicago, and then find a way to play competitive football against Miami, largely by stopping what has been a sub-par rushing offense, I’ll be very happy going into the bye.

4-2 has been the expectation all season, but 5-1 would make me ecstatic. I think that we can all agree on that, at the end of the day.