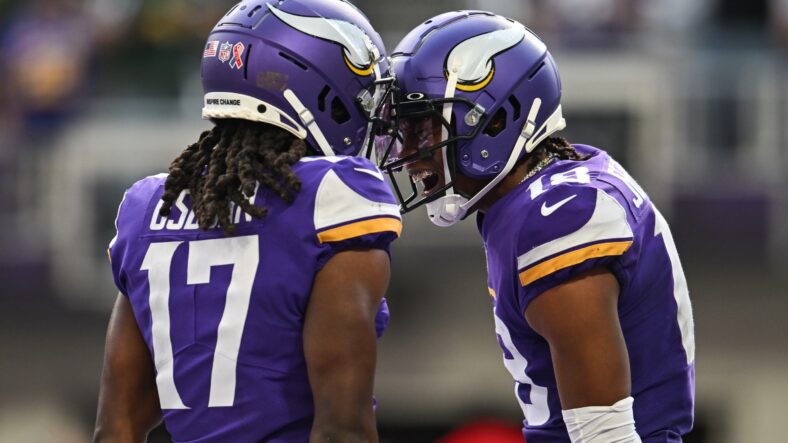 A large part of what made it so impressive is that the team integrated so many of their crucial players (as we discuss on Notes from the North). The offense is loaded; at different points this season, we could have forgotten that reality. Obviously, there’s only so much that can be accomplished in one game, but we may also say that more can be done to feature the various playmakers.

The opening drive of the Saints game showed no such issues. In fact, it was a model drive for the Vikings offense.

Coming into the game, we knew that the Vikings had to do a better job of featuring Justin Jefferson. The issue, of course, is that the New Orleans Saints also understood this reality. Making matters even more challenging was the presence of Marshon Lattimore, who is a good player. In the end, Jefferson won the matchup, but it wasn’t a guarantee heading into the game.

The opening play of the game went to Jefferson. A short pass near the line of scrimmage ended up going for 10 yards and a first down. It was a safe throw and a good way to get the offense moving in the right direction.

Take a peak at just a sampling of some of the other plays:

What’s the point of the somewhat random list? It’s to illustrate just how good of a job Kevin O’Connell did of featuring his different weapons on offense. Minnesota’s opening drive touchdown was largely the result of being able to get the ball into the hands of the various different pass catchers and running backs.

Since his TD catch didn’t count, Osborn technically didn’t make a play on that drive. Nevertheless, he was targeted, forcing the defense to respect the fact that he was part of the game plan. The top 3 receivers, the TE1, and top 2 RBs were all integrated into that opening drive.

Perhaps even more impressive is that O’Connell and Cousins sprinkled in some no huddle, forcing the defense to work quickly. Cousins took snaps from shotgun and under center. He used play action. C.J. Ham got onto the field. Jefferson’s second catch featured him coming out of the backfield.

O’Connell threw a ton at the Saints in the early moments of the game.

Moreover, we should perhaps draw attention to the fact that the touchdown pass occurred on a 3rd & 15. The team had just scored a TD to Osborn but it got called back. They showed good resilience and had great execution on the screen to Mattison.

Add it together and it’s an impressive 7-0 lead following a drive that took nearly 7 minutes.

O’Connell ought to pursue similar brilliance in upcoming games.

The next chance will be against the Chicago Bears in the upcoming game at U.S. Bank Stadium. The division rivals are in the middle of rebuild, so it ought to be a decisive win for the Vikings. Alas, football is an unpredictable sport, and what “ought” to happen often doesn’t occur.

A great way that Minnesota can increase their chances of victory rests in finding a way to ensure their skill guys are involved in the game. It’s far simpler to focus on shutting down Jefferson than needing to shut down Jefferson, Thielen, and Cook, especially if the other offensive weapons have shown they can make some plays.

A 4-1 record is up for grabs on Sunday afternoon. Hopefully, the offense can do their part by replicating what they accomplished in the opening drive against the Saints.